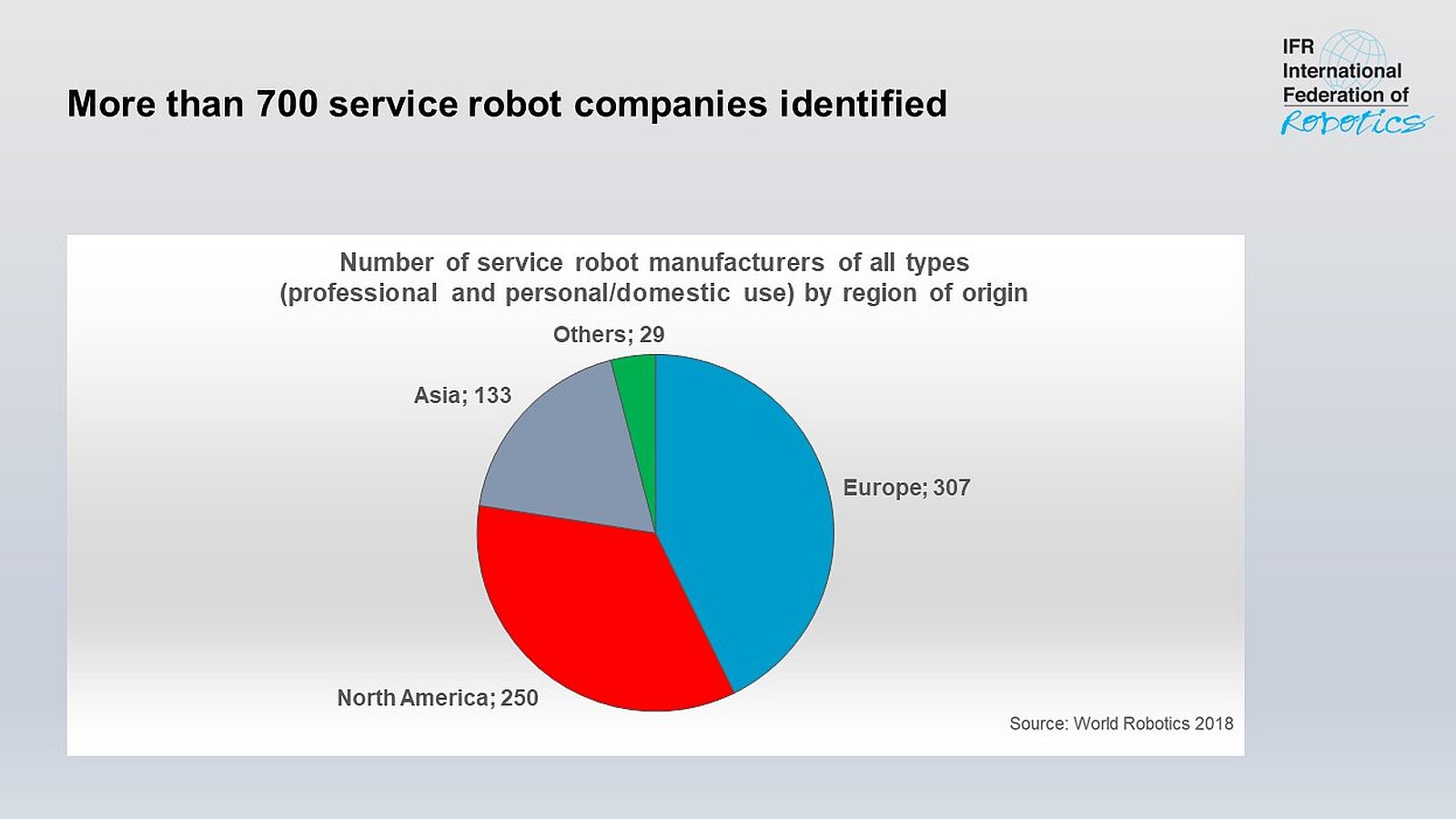 “In terms of value, the sales forecast 2019-2021 indicates a cumulative volume of around US$46 billion for the professional service segment”, says Gudrun Litzenberger, General Secretary of the IFR. “Robots for logistics, medical and field services are the most significant contributors.”

69,000 logistic systems were installed in 2017 – this is 162 percent more than the number of units in 2016 (26,300). 6,700 automated guided vehicles in manufacturing environments and 62,200 in non-manufacturing environments are building up this increase compared to automated guided vehicles sales numbers in 2016. The value of logistic systems sales is estimated at about US$2.4 billion – an increase of 138 percent compared with 2016.

Medical robots are also well-established service robots with a considerable growth potential. The total value of sales of medical robots increased to US$1.9 billion, accounting for 29 percent of the total sales value of the professional service robots in 2017. Most important applications are robot assisted surgery or therapy and rehabilitation robots which assist people who have a disability with necessary activities or they provide therapy to people with the aim of improving their physical or cognitive functions.

The sales value of field robots, which mostly comprise milking robots, account for about 15 percent of the total value of professional service robot sales. Their share slightly decreased by 2 percent to US$966 million. The total number of field robots sold in 2017 was 6,375 units, accounting for a share of 6 percent of the total unit supply. A total of almost 5,400 milking robots were sold in 2017 compared to almost 5,300 units in 2016, representing a 2 percent increase. In 2016, sales decreased due to financial problems of the dairy farmers. The market is still showing the effects of this in 2017. Agricultural robots (broad acre farming for crop, vegetable and fruit cultivation, harvesting) are getting grounded in the market. Sales increased from 190 units in 2016 to 520 units in 2017.

Service robots for PERSONAL and DOMESTIC USE – market overview

At the same time, the market for personal service robots, which assist or entertain humans in their everyday lives, is progressing rapidly. Value was up by 27 percent to US$2.1 billion. The total number increased by 25 percent to about 8.5 million units in 2017. It is estimated that nearly 6.1 million robots were sold for domestic tasks, including vacuum cleaning, lawn-mowing, window cleaning and other types – an impressive 31 percent increase compared to 2016. The actual number might, however, be significantly higher, as the IFR survey is far from having full coverage in this domain. The value was about US$1.6 billion. Compared to 2016, this represents an increase of 30 percent.

“Robotics in personal and domestic applications has experienced strong global growth,” says Martin Haegele, Chairman of the IFR Service Robot Group and longtime author of the report. “Floor cleaning robots, robo-mowers and robots for edutainment (the latter increasingly referred to as social robots), have increasingly become part of our lives. Future product visions point to domestic robots of higher sophistication, capability and value, such as assistive robots for supporting the elderly, for helping out with household chores and for entertainment.”

European service robot manufacturers play an important role in the global market: about 300 out of the meanwhile more than 700 registered companies supplying service robots come from Europe. North America ranks second with about 250 manufacturers and Asia third with about 130. Furthermore, about 30 percent of the service robot suppliers are considered as start-ups with a maximum age of five years therefore indicating the dynamics of this emerging and progressive segment in robotics. 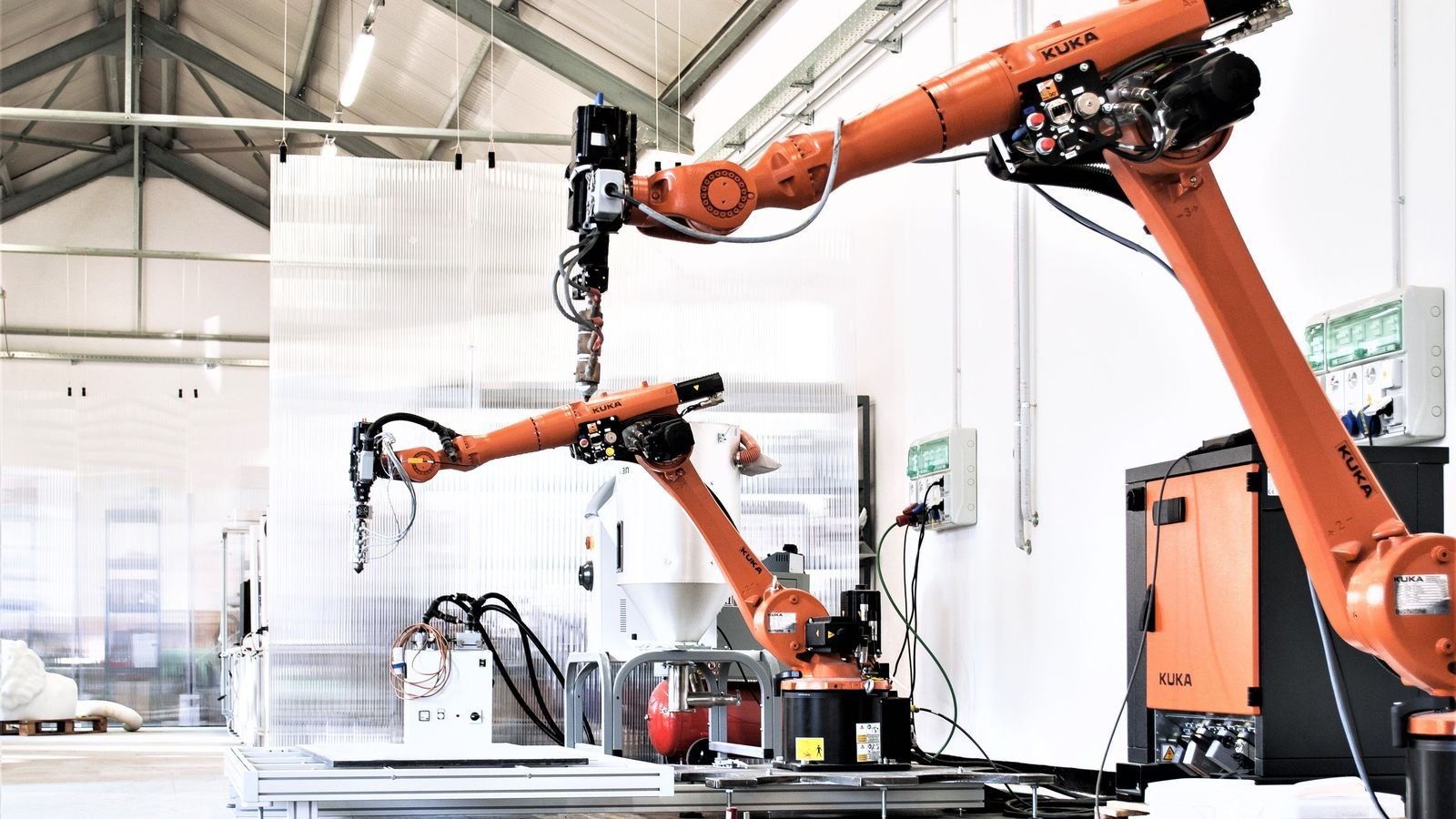 With 3D Printing Against the Coronavirus 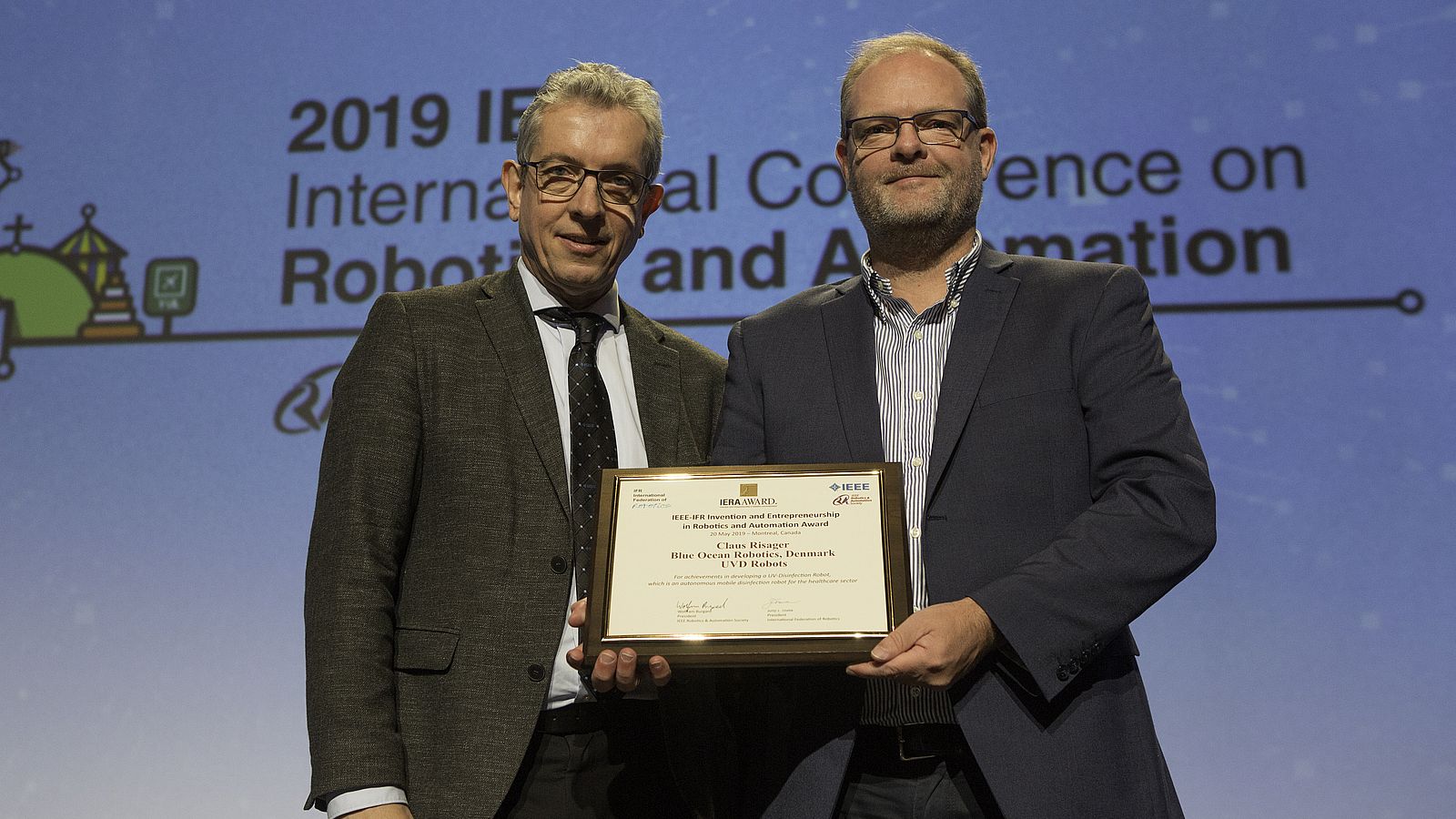 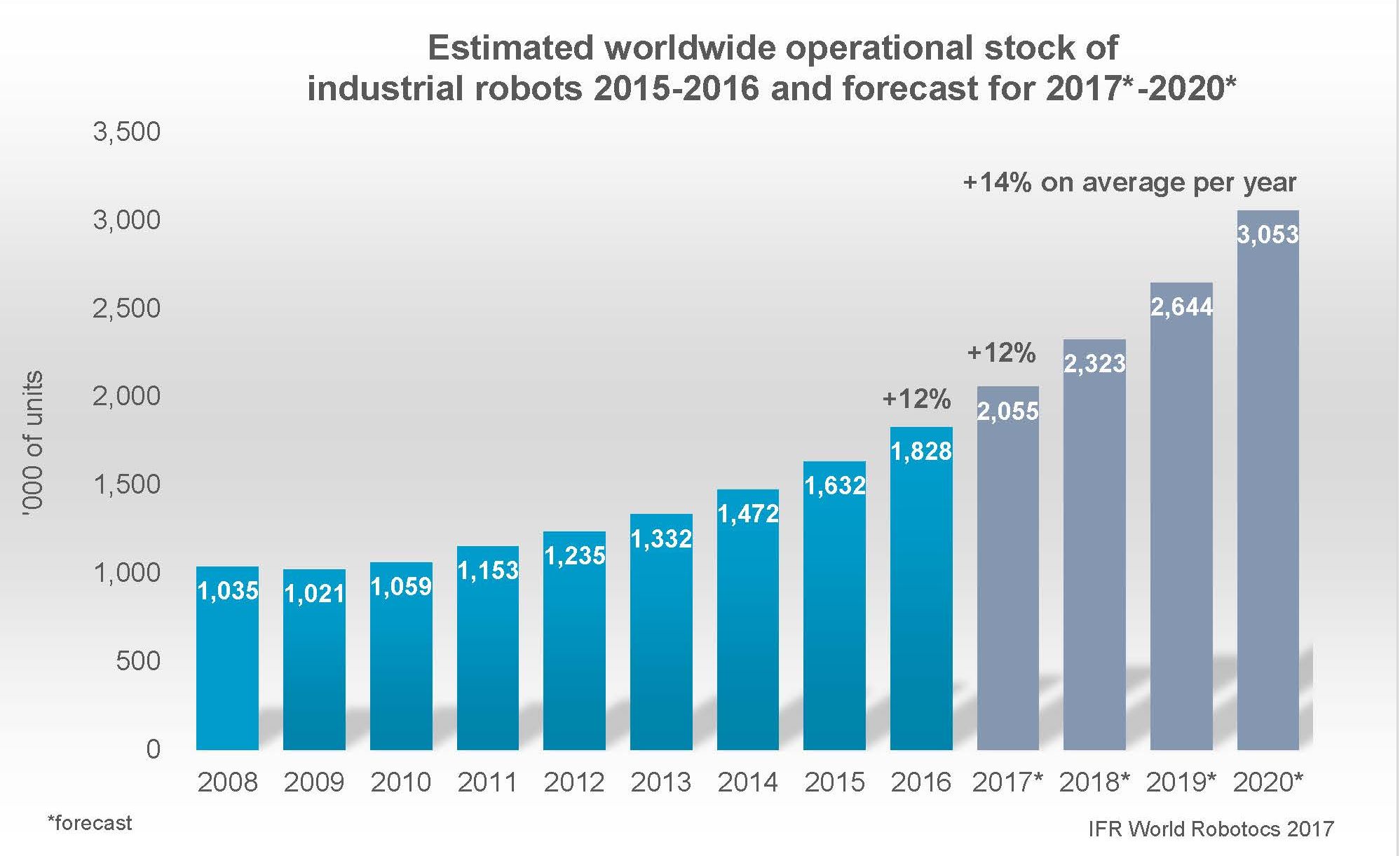 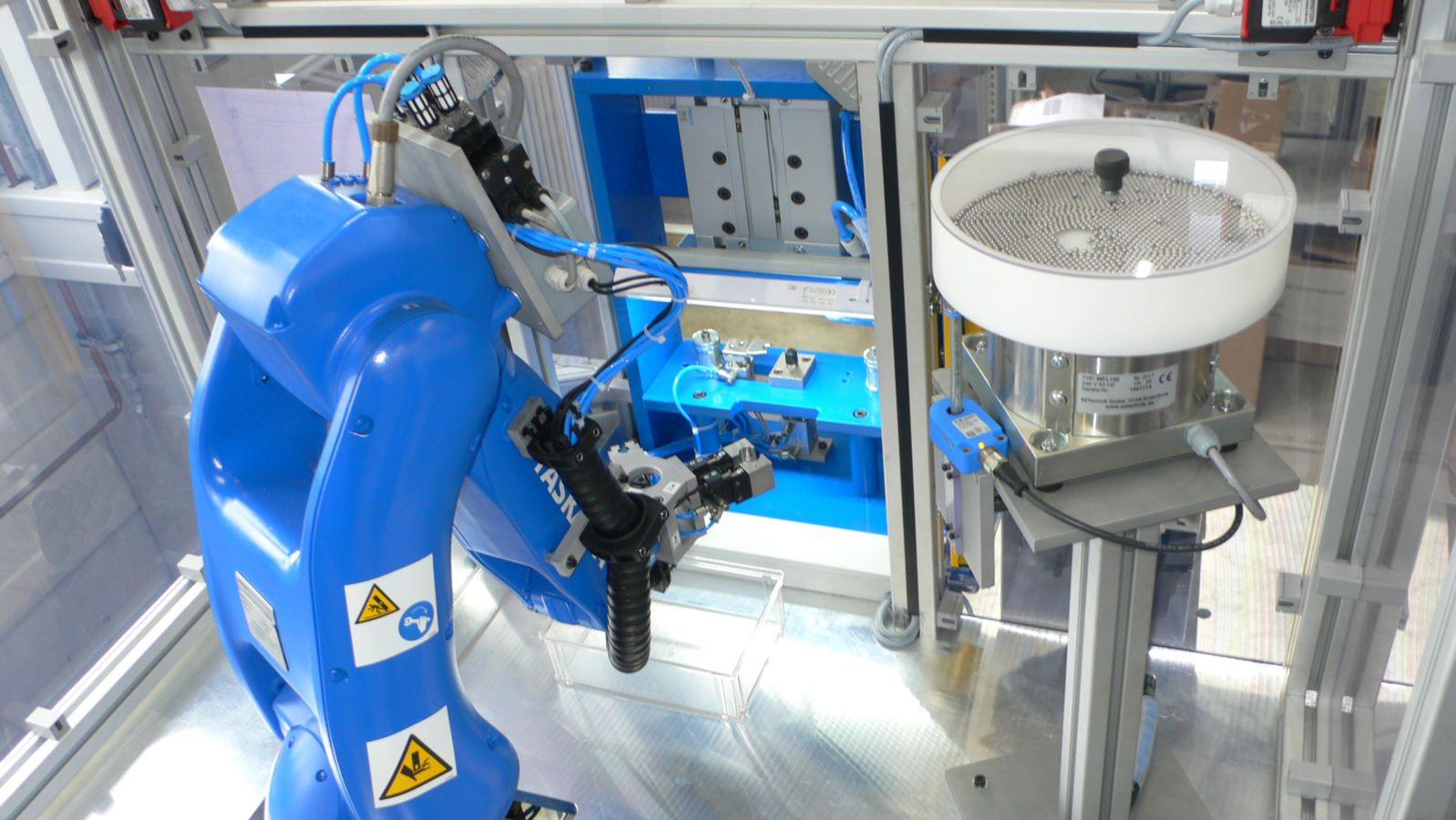