US robot density now more than double that of China

US Industrial robot installations rise +14% - US Robot Market: 2.1 billion US$

Frankfurt, Chicago, Apr 03, 2019 — Robot sales in the United States hit a new peak of almost 38,000 units, setting a record for the eighth year in a row (2010-2018). Today, robot density in the US manufacturing industry is now more than double that of China and ranks seventh worldwide. 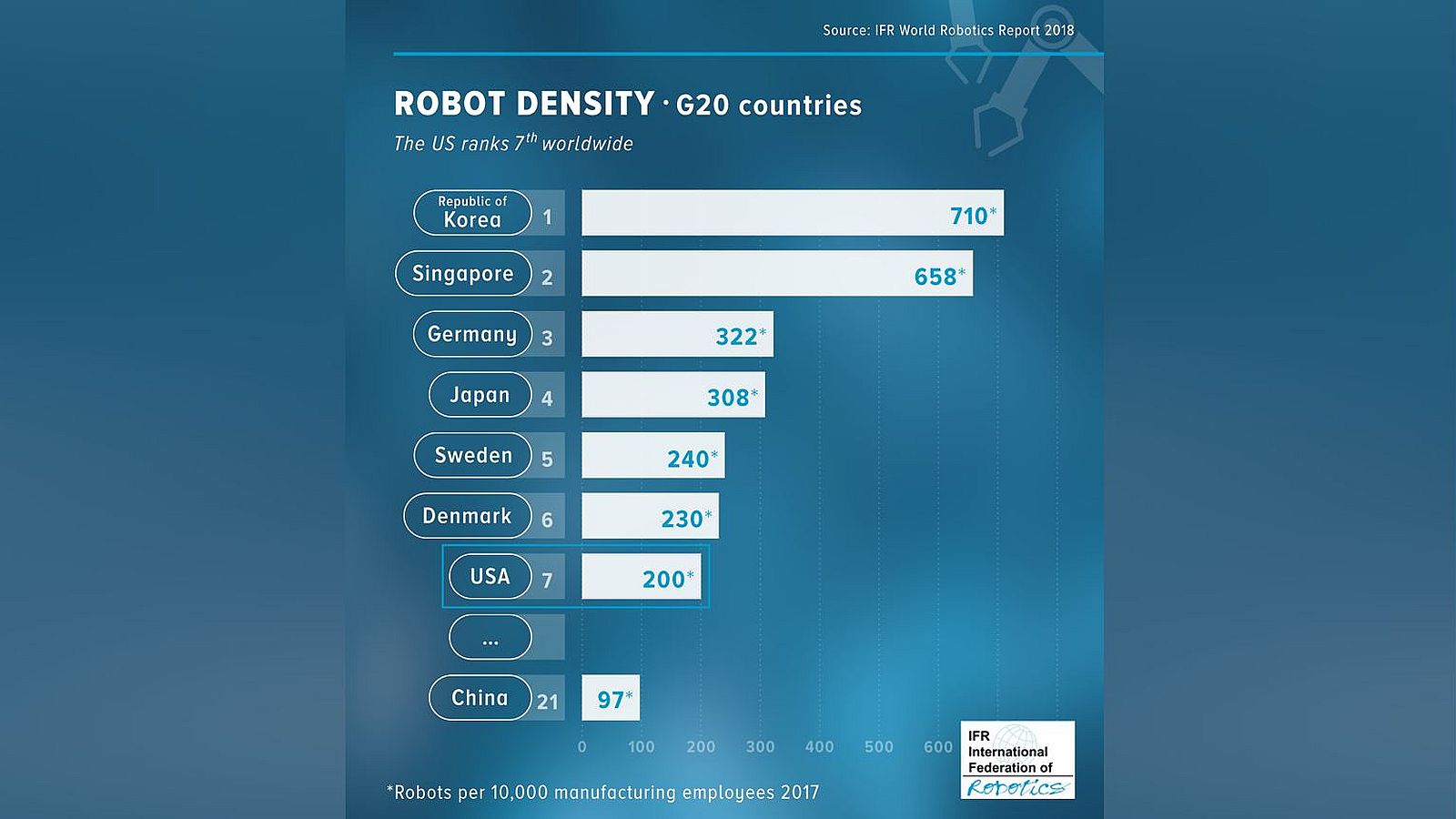 Robot density in the US manufacturing industry reached 200 robots per 10,000 employees vs. 97 in China (2017). The trend to automate production in both domestic and global markets is the main driving force of robot installations in the US. The general industry sector, particularly the food and beverage industry (+64%) and the plastic and chemical products industry (+30%), had the highest growth.

In terms of market share, the automotive sector is the most important customer for robots. The US car market is the second largest car market in the world after China. Within the US automotive sector, part suppliers account for two thirds of installations: Sales went up by 9 percent (2017-2018). However, car manufacturers (OEM) invested less in automation – installations went down by 26%. The average annual growth rate of robot sales to the US automotive industry between 2013 and 2018 was 7%. From a peak of 16,311 units in 2016, robot sales decreased by 5% from 15,400 units in 2017 to 14,600 units in 2018 - accounting for a share of 38% of total installations.

The electrical/electronics industry was the second most important customer in 2018 with a market share of 18% of the total supply. From 2013 to 2018, robot installations increased by 15% on average per year.

The number of installations rose by some 2% to almost 6,700 units in 2018. In terms of new developments, several production sites for lithium ion batteries as well as for chips and sensors have been created in recent years and more will be established in years to come.

“The North American countries (United States, Canada, and Mexico) represent the second largest operational stock of industrial robots in the world after China,” says Junji Tsuda, President of the International Federation of Robotics. “Whilst numerous important robot system integrators come from North America, most big robot manufacturers are based in Japan, Korea and Europe. At North America’s number one robot and automation event ”Automate 2019” in Chicago, from April 8–11th, you will be able to see the latest innovations in robotics, vision, motion control and automation technologies from around the world.