Frankfurt, Shanghai, Sep 18, 2019 — Sales value of service robots for PROFESSIONAL USE increased by 32 percent to 9.2 billion U.S. dollars. Logistic systems such as autonomous guided vehicles (AGVs) represent the largest fraction in the professional service robot market (41% of all units sold). The second largest category is inspection and maintenance robots, (39% of all units sold). These two segments account for 80 percent of total market share. 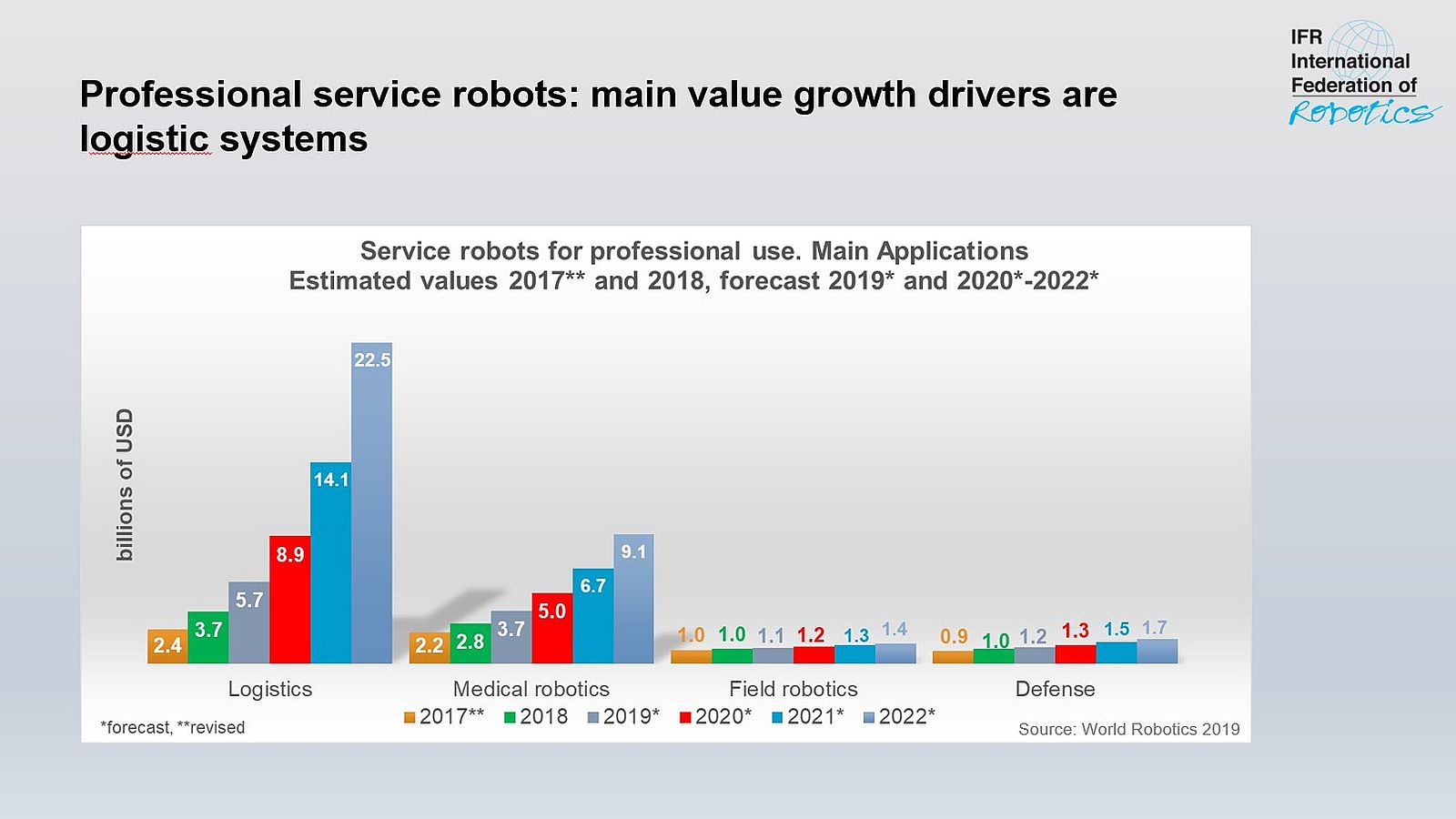 Service robots for PERSONAL AND DOMESTIC use are mainly in the areas of household robots, which include vacuuming cleaning and lawn-mowing robots. Value was up by 15 percent to 3.7 billion U.S. dollars. The IFR outlook predicts a strong sales increase for professional and personal service robots (2019-2022). This is according to the 2019 World Robotics Report – Service Robots, presented by the International Federation of Robotics (IFR).

“In terms of value, the sales forecast for 2019 indicates a cumulative volume of around 12.6 billion U.S. dollars for the professional service robot segment”, says Dr. Susanne Bieller, General Secretary of the IFR. “Robots for logistics, medical and field services are the most significant contributors.”

The sales value of logistic systems is estimated at almost USD 3.7 billion which is 53% more than the year before. In terms of units, almost 111,000 logistic systems were sold in 2018 – this is 60% more than in 2017 (69,000). 7,700 autonomous guided vehicles (AGV) in manufacturing environments and almost 103,000 in non-manufacturing environments are the driving force behind this rapidly growing market. The trend to use logistic systems in non-manufacturing industries has been strongly driven by warehouse solutions for major e-commerce companies. A strong potential can also be found in hospitals running their logistics with the help of professional service robots.

The sales value of field robots increased by 8% to USD 1 billion, accounting for 11% of the total value of professional service robot sales. A total of 5,800 milking robots were sold in 2018 compared to 5,400 units in 2017, an increase of 8%. Sales of agricultural robots used e.g. for automation of crop farming and horticulture, are expected to grow strongly by an average of some 50% per year. In 2022, sales are expected to reach 2,400 units.

Exoskeletons support ergonomic working by reducing loads on the worker. Sales of powered human exoskeletons were up from 6,700 units in 2017 to 7,300 units in 2018. There is a high growth potential for this kind of robot.

Service Robots for PERSONAL and DOMESTIC USE – Market Overview

At the same time, the market for Personal Service Robots, is developing rapidly. It is projected that sales of all types of robots for personal and domestic tasks could exceed 22.1 million units (valued at USD 4.6 billion) in 2019 and 61.1 million units, with an estimated value of USD 11.5 billion, in 2022.

Vacuum and floor cleaning robots will enter more and more households in the world. It is estimated that in 2019 more than 17.6 million units of domestic robots - including autonomous lawn-mowers, pool cleaners and vacuum cleaners - will be sold. Unit sales are expected to increase by 46% on average per year so that more than 55 million units will be sold in 2022.

Service robot manufacturers for professional use by regions

Please find files for download below. Robot images for download in our newsroom. Further information on World Robotics, like Executive Summary etc., can be found in free downloads.