Topic: "The Future of Robotics in China"

The CRIA-IFR CEO Round Table was sponsored by the Chinese Machinery Industry Federation (CMIF), the Chinese Robot Industry Alliance (CRIA) and the International Federation of Robotics (IFR). Topic of discussion was: “The Future of Robotics in China”! 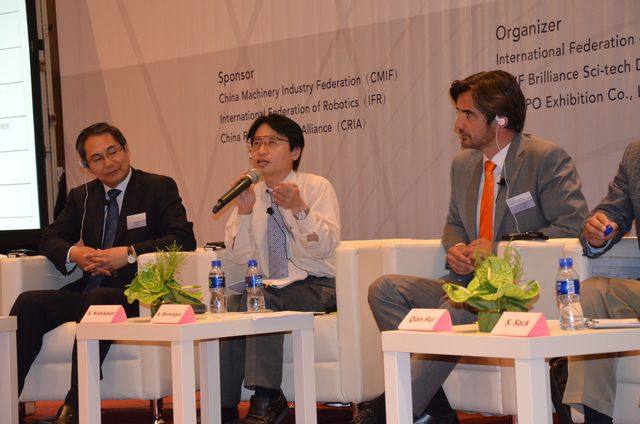 In the welcome address of the CEO Roundtable by Dr. Sakakibara (President of IFR), he said that in the recent four to five years, the robot industry developed a lot, CAGR readed 8‐9% in recent years, total value of output reached 25,5 billion US$ in 2011. Ms. Zhao Xinmin (Head of CRIA statistics department) declared that according to the summary of the CRIA member companies, in 2011, the total value of output in China is no more than 600 million RMB, while in 2012, the value is reached 1 billion RMB, increased by 67%.

The CEOs and the participants of the Roundtable think commonly that there will be a great development room in the near five to ten years. As the labor cost increased, the sense of safety become stronger and stronger, especially the demand of the transfer and update for the Chinese general industry, industrial robots will be used in a wider scope and larger scale.

Secondly, the general industry has a higher demand of usage of industrial robots. Although currently, the automotive industry is the largest end‐user in robots application, while the other industry such as logistics, AVT, electronic and electric manufacturing, food and beverage industry, chemical and pharmaceutical industry, etc. industrial robots will be used more and more extensively.

The Chinese robotics industry need the following points to be updated or developed: 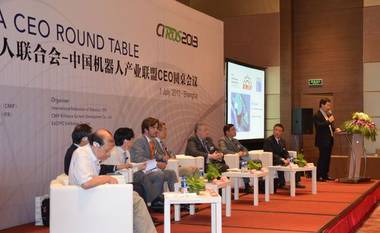 On the terms of the outlook of the robotics industry in China, almost all the participants show confidence. While Dr. Gu Chunyuan (ABB China) commented that the industrial robots application in China should not fully and simply copy the experiences from abroad, it should be a combination of the latest technology and the market demand in China, to provide the high performance/cost ratio, domestic market fitted product. Mr. He Minjia (GSK Guangzhou) commented a blueprint in the factory: all the repeatable and heavy work depend on robots, three to eight years later, the industrial robots are vastly used, every factory will rely on robots in production.