Jan 12, 2023 — A flexible, efficient and meticulous employee is what every boss wants, and that’s precisely what Bastian Fest from FMO Surface found in the LBR iisy. Hand in hand with its team, the cobot now checks Data Matrix codes for quality and completeness. The new colleague has been accepted unreservedly and it’s no problem to train either, even for employees with no experi-ence of programming. Quite ‘iisy’, in fact! 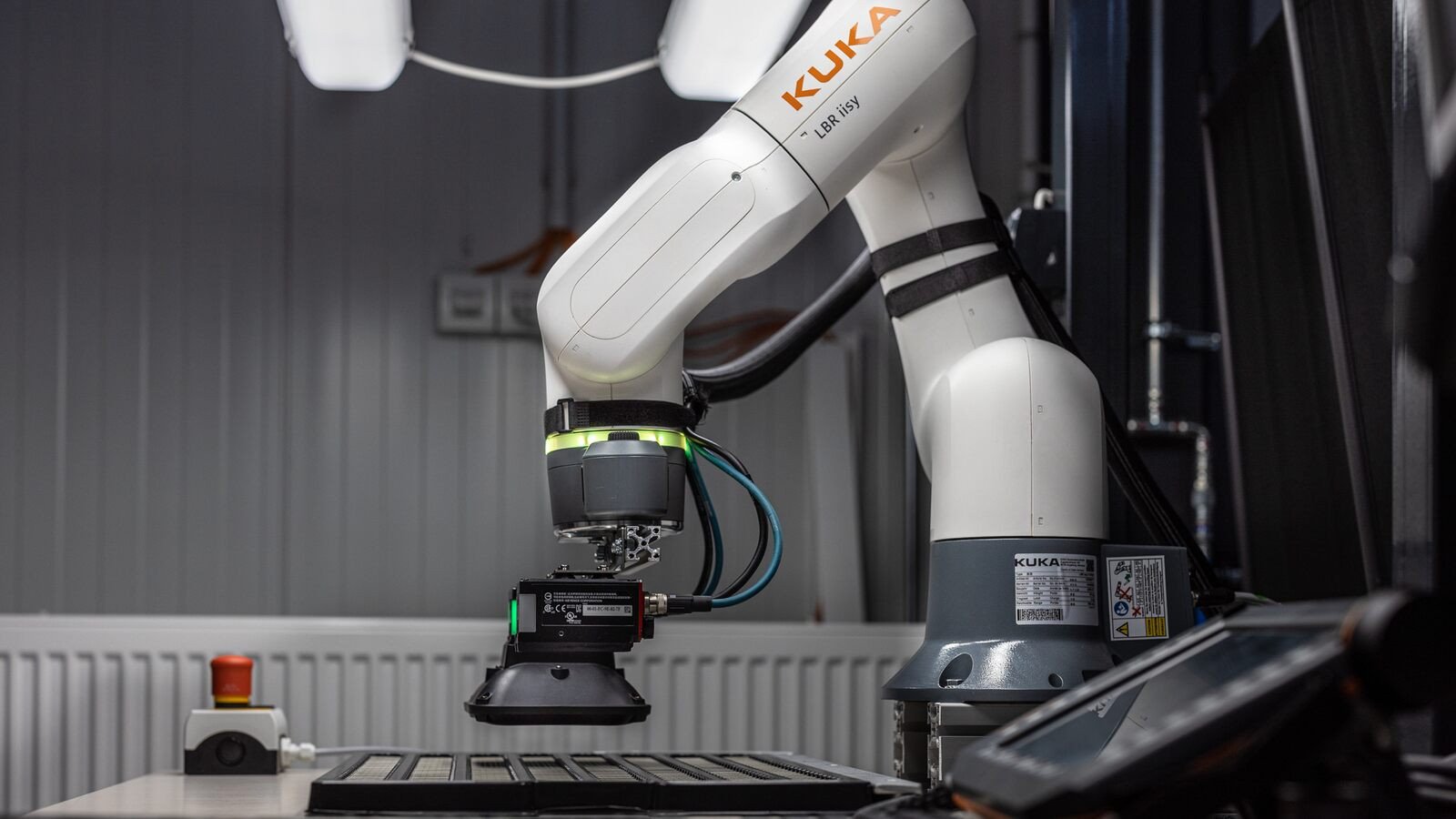 The KUKA Cobot LBR iisy is the first robot to run on the new, easy-to-use KUKA operating system iiQKA.OS. © KUKA

Flexible and simple: everything is iisy

At a trade fair in the German town of Kassel, Bastian Fest, Managing Director of FMO Surface GmbH & Co. KG, met KUKA Sales Engineer Robert Korte, who introduced him to the LBR iisy collaborative robot. The entrepreneur was immediately convinced of the advantages of the cobot. Fest then took a closer look at the LBR iisy at KUKA’s branch office in Siegen and decided to purchase it – easily and conveniently via the online KUKA Marketplace. “The LBR iisy combines several factors that we require: flexibility, ease of programming and suitability for collaborative operation. That is why we purchased it, without knowing exactly where we wanted to use it,” says Fest of this rather unusual approach. As far as the programming of robots is concerned, Fest describes himself as a beginner. Although he did complete a training course at the KUKA College when purchasing his first KUKA robot, a KR CYBERTECH, four years ago. All the more reason for him to be delighted with the new cobot, whose ease of use means that even novice pro-grammers can get to grips with robotics.

Automation in small and medium-sized enterprises

FMO Surface, a family-owned company specializing in the finishing of plastic surfaces, was founded in 1999 in Lemgo, in the region of East Westphalia-Lippe, and currently employs 75 people. Around seven million bus connectors are laser-marked with Data Matrix codes (DMC) here every year. A few years ago, the company began to automate various processes. The cooperation with KUKA began with a KR CYBERTECH nano (KR 10 R1420), which is used for palletizing and for tending a laser system. Two years later, another KUKA robot from the KR CYBERTECH series was added, which can turn over, measure and laser the plastic parts to be finished. “Particularly in view of the shortage of skilled workers, automation plays an important role for a medium-sized company like ours,” explains Bastian Fest. The LBR iisy then joined the robot portfolio in March 2022.

A challenge for the LBR iisy

The job that suited this new colleague was quickly found, namely in the quality control of bus connectors. Bus connectors are laser-marked with Data Matrix codes, each with a numerical sequence of eight digits, before being installed in controllers. Since multiple components are marked with a DMC and are dependent on one another, reliability is of paramount importance with regard to the traceability of an entire module. For this reason, special attention must be paid to checking the quality and completeness of the Data Matrix codes. This was previously carried out by human employees at FMO Surface, manually, using a scanner. Just in time for the start of spring 2022, the LBR iisy took over this task. The cobot now works hand in hand with laser department foremen like Tim Hertz. Hertz reports: “We save an enormous amount of time using the LBR iisy because we no longer have to scan each part individually. And if the cobot reports a fault, we don’t have to open a cage or stop an entire system, we can simply remove the defective part and replace it.”

Attracting human employees for monotonous yet demanding tasks such as checking Data Matrix codes is becoming increasingly difficult for companies like FMO Surface. Training the LBR iisy, on the other hand, posed no problems. “It took us just 30 minutes to unpack and install the robot and perform initial programming,” says Bastian Fest. With the aid of the KUKA smartPAD pro and the KR C5 micro robot controller, even employees with virtually no experience of robot programming can operate and train the cobot. “The LBR iisy runs on the basis of the new iiQKA.OS operating system, making it easy to install, configure and program,” explains Robert Korte from KUKA. The cobot is not only up and running in just a few minutes, but it can also be adapted to new challenges equally quickly. An enormous advantage for Fest: “We don’t have engineers here, so ease of integration is all the more important.”

Equipped with two cameras, the cobot now checks Data Matrix codes. There are 200 plastic parts on a tray, which are slid under the LBR iisy with its two Keyence cameras. “In the first step, the quality of the codes is spot-checked on the basis of 20 parts,” explains foreman Tim Hertz. “If everything is OK, the cobot moves over the tray again and checks whether all 200 parts are present and all codes are readable.” One camera checks the quality with the associated software, while the second is responsible for completeness. If anything is wrong, in other words if a code is of insufficient quality or incomplete, the robot stops and indicates which bus connector is affected. A human colleague can then replace the faulty part; the tray is checked again and ideally released.

In the past, reports Tim Hertz, this type of quality control for DMCs was much more time-consuming. “When checking for completeness, we had to scan each part individually,” says Hertz. For this, an employee had to take the components out of the tray and subsequently put them back again. Today, with the LBR iisy, this task is performed much faster and more precisely. According to Bastian Fest, the customer – an automation company – specifically wanted an automated solution. This is because installing an imperfect bus connector in the controllers could prove to be costly. Bastian Fest reports: “The bus connector is used as the very first part of the controller. It is soldered, screwed onto a circuit board and the whole controller is built around it. So, if the Data Matrix code is poor, when will that be noticed? In the goods dispatch department!” At that point, the damage is considerable.

The LBR iisy can be integrated into existing processes just as easily as it can be repro-grammed for new tasks. From loading machines to packing or various handling tasks, the LBR iisy has everything under control. “The LBR iisy’s integrated cable routing and energy supply system also enable quick and easy tool changing,” adds Robert Korte. For new applications, the cobot can be equipped at any time with additional accessories from the KUKA Marketplace. For Bastian Fest, this is a real bonus: “With this product, I naturally have something that is highly flexible. It makes no difference to the robot whether I mount a suction cup, a gripper or a camera on the front, but it enables me to cover my entire spectrum.”

The employees at FMO Surface were enthusiastic about the new colleague right away, emphasizes Managing Director Fest. There was no reticence. Robert Korte explains: “Thanks to the safety features, collaboration with people in a single workspace is possible.” Equipped with sensitive joint torque sensors in all six axes, the LBR iisy reacts im-mediately to the slightest contact and offers certified collision protection. This makes it the ideal assistant in any production facility. Bastian Fest is already planning to automate further processes. He notes that the cobot could also provide valuable services in pad printing in the near future. Furthermore, he is also hoping to make use of the larger versions of the LBR iisy with their payload capacities of 11 and 15 kilograms.