Seoul, Dec 20, 2016 — The worldwide number of domestic household robots will rise to 31 million between 2016 and 2019. The sales value of robots cleaning floors, mowing lawns, and cleaning swimming pools will grow to about 13 billion US dollars in this period. 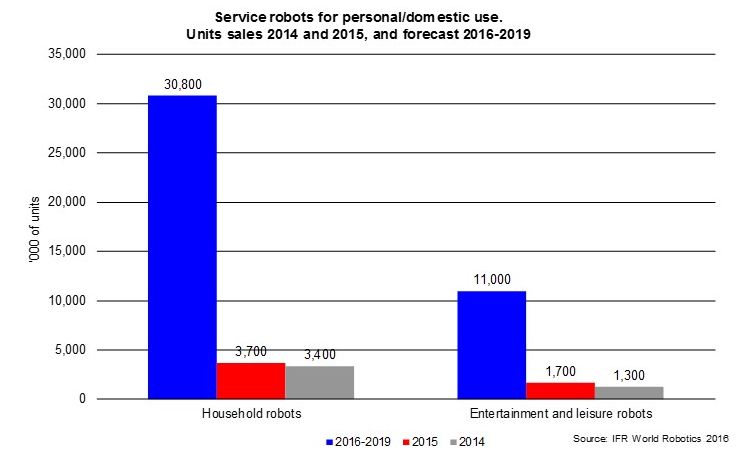 These forecasts are takes from the 2016 World Robotics Report, “Service Robots”, published by the International Federation of Robotics (IFR).
“Robotics in personal and domestic applications has experienced strong global growth with relatively few mass-market products: floor cleaning robots, lawn mowers and edutainment robots are dominating the market,” says Joe Gemma, President of the International Federation of Robotics. “But the next generation of robots will have even greater capabilities and will open up new fields of application.”

Sales figures for the entertainment sector show a similar dynamic. In 2015, the total number of toy robots, remote-controlled multi-media robots and personal edutainment robots amounted to 1.7 million units. The IFR forecasts that this market will grow to 11 million units between 2016 and 2019. Toy and hobby robots account for 70 percent of the market share in the entertainment segment.

Assistive robots for the handicapped and elderly

Strong growth is reported in sales of handicap assistive robots and for the elderly. At 4,700 units (2015), the sales volume is still comparatively low. But sales figures are expected to rise to 37,500 units from 2016 to 2019. The rise in the value of sales will mirror this development: Sales in 2015 amounted to USD 16.8 million - a year-on-year increase of 34 percent. The total value is forecast to rise to USD 97 million between 2016 and 2019.