The 2015 Invention and Entrepreneurship in Robotics and Automation (IERA) award was shared by François Boucher of Kinova Inc., Canada and Tom Lipinski of Q-Bot Limited, United Kingdom. 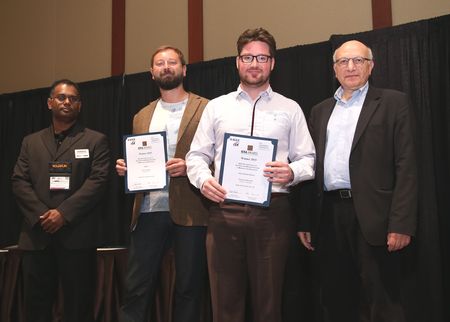 The 2015 Invention and Entrepreneurship in Robotics and Automation (IERA) award was shared by François Boucher of Kinova Inc., Canada and Tom Lipinski of Q-Bot Limited, United Kingdom. The award was announced on May 28th at the Award Luncheon of the IEEE International Conference on Robotics and Automation (ICRA) held in Seattle after the judging panel decided to jointly honor two of the finalists, Kinova and Q-Bot. The third finalist was Sander Karl of Fortschrittliche Robotertechnologie GmbH & Co. and the presentation was made by Björn Hein of the Karlsruhe Institute of Technology, Germany. The three finalists were selected from a pool of ten applicants.

The panel wrote the following citations in announcing the two winners:

Kinova: Launched in 2010, JACO Rehab Edition is a six-axis robotic manipulator arm with a threefingered hand. This little marvel of engineering significantly improves the lives of persons with reduced mobility. Lightweight, very quiet, unobtrusive, safe and even weatherproof, JACO assists anyone with an upper body mobility impairment to perform complex actions. Many everyday activities, such as picking up glasses, holding a fork or opening a door, which most people do without thinking, can become insurmountable for people who have a disability and have to ask someone else to do it for them. The JACO arm makes life easier for these people by giving them greater freedom and independence.

Q-Bot: “Mini JCBs” are compact, powerful and capable of operating in hazardous environments. These intelligent tools can remotely carry out operations that would otherwise be impractical and too cost prohibitive for humans to do so. The initial application is the retrofit of underfloor insulation. A market worth $20bn in England alone, and which is only practically and economically possible with robots.

In its eleventh year, the IERA award is jointly sponsored and organized by IEEE RAS and the International Federation of Robotics (IFR). It highlights and honors the achievements of inventors with value creating ideas and entrepreneurs who propel those ideas into world-class products. The entries are evaluated based on criteria that give equal consideration to both innovation and entrepreneurship. The winners were awarded a plaque and a $2000 cash prize, which will be shared by the joint winners this year! For additional details on the award and a list of the winners from the previous ten years, please see IFR webpage.