Jun 16, 2021 — Order your morning latte macchiato conveniently via app from the bus, quickly scan the QR code and let the robot barista serve it fresh - MyAppCafé makes it possible. 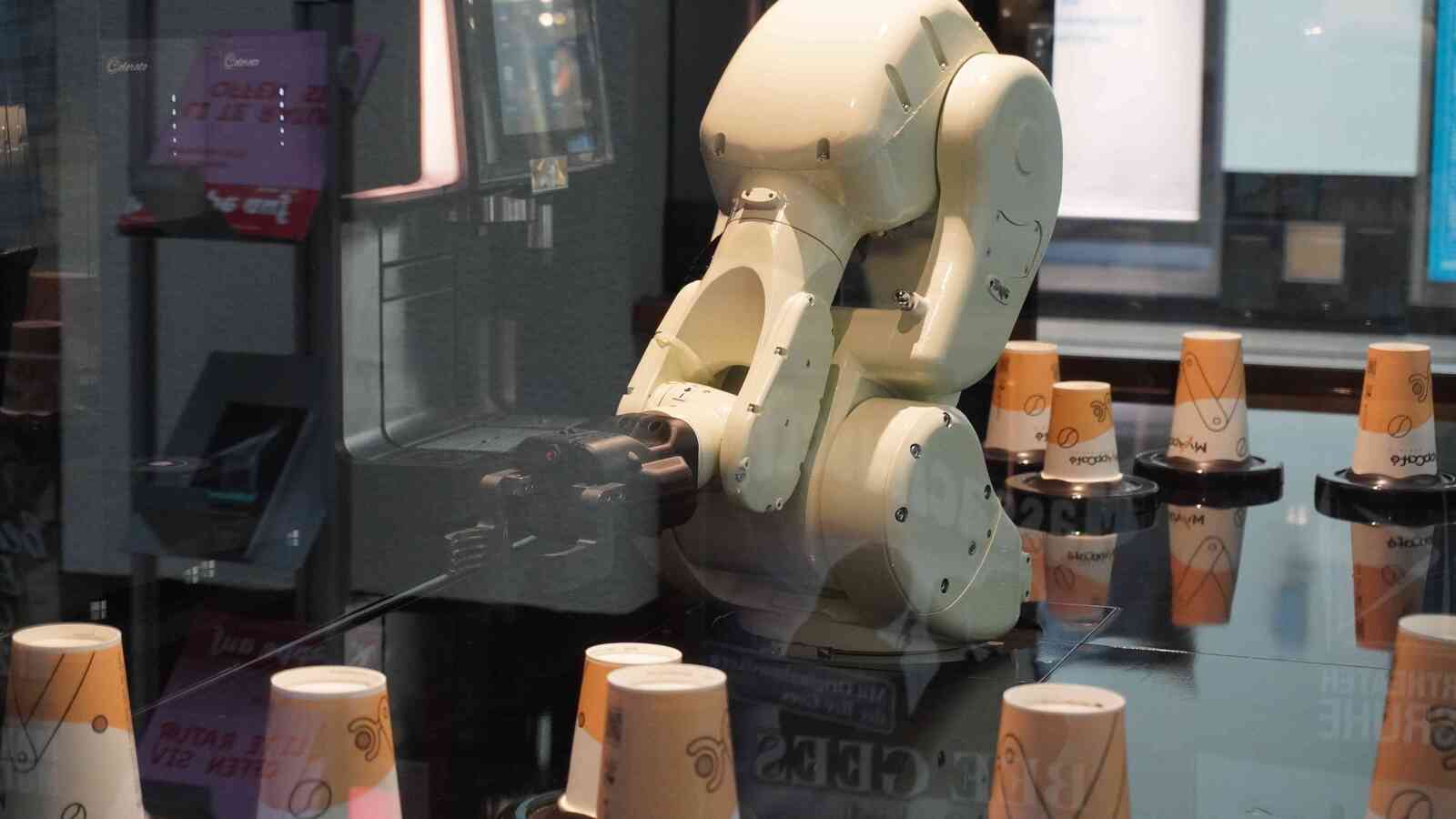 Order your morning latte macchiato conveniently via app from the bus, quickly scan the QR code and let the robot barista serve it fresh - MyAppCafé makes it possible.The 160 variants of coffee specialties - including espresso doppio, cappuccino, chocciato or latte - can of course also be ordered directly on the touchscreen.

The idea came to Karlsruhe-based MyAppCafé founder Michael Stille during a “Tatort” episode in which a catering robot played a central role. First conversations quickly began. A similar solution was already on the market in the USA - but without interest for the European market. Together with two other Karlsruhe companies, IBS and Rothweiler Feinwerkmechanik, Stille developed its own solution.

MyAppCafé delivers the whole concept - turnkey and automatically. The decisive goal during development was cost effectiveness: Each franchisee only needs to spend a maximum of one hour a day refilling and waiting, the rest is fully automated. MyAppCafé only needs to be refilled after around 650 issues - of course the system informs the operators in good time. An important argument for the fully automated gastronomy solution, says Michael Stille: “Almost no personnel is required, a maximum of one hour of working time for refilling and cleaning must be scheduled after 650 issues. By comparison, four employees would be needed to provide the same service. With our robot Barista, you are in the profit zone much faster”. The integrated fully automatic cleaning systems combine the highest hygiene standards with minimum effort.

A robot is the heart of the cell: The engineering office IBS has been a close partner of the international robot manufacturer Kawasaki Robotics for years. After reviewing and comparing several options, the choice for the robot quickly fell on Kawasaki - also by recommendation of IBS. The prototype as well as all further cells were built based on the Kawasaki Robotics RS005L.

With a maximum payload of 5 kg and a maximum reach of 903 mm, the RS005L is part of the universal R series for small to medium payloads, suitable for assembly, material handling, machine tending and many other applications. Its special design enables the high-speed robot to have a longer reach and an extended working range.

In addition to the technical aspects, the RS005L convinced Michael Stille with its appearance, which fitted well into the design of the cell: “We wanted to have a real industrial robot inside, not a ‘toy’. And Kawasaki was very accommodating to us as a partner and through the quality of the robots.”

IBS finally developed the approximately 7 square meter large cell according to the detailed ideas of Silence. The implementation was demanding, among other things for a smooth communication between Kawasaki robot, WMF coffee machines, the output and the app. Via business and technology networks in Karlsruhe, the experts were called in for all components and aspects. Thus the startup ROCK5 from Karlsruhe developed the intuitive App. Within a few months, the development led to the successful prototype, which completely met the high demands - full automation, intuitive operation and reliability.

Just in time for the Franchise Expo in Frankfurt am Main in November 2019 the MyAppCafé cell was ready for the market and was presented to the public for the first time - with great success and numerous inquiries. Home game in Karlsruhe: For the first MyAppCafé cell, the Postgalerie shopping center was quickly found as an optimal location - also easily accessible for tests and presentations. Besides Karlsruhe, there are already locations in Böblingen and the Stadtgalerie Heilbronn aktuell, Saarbrücken will follow soon.

After ordering the desired coffee specialty via app or touch screen, the Kawasaki robot takes a cup and transports it to one of the two high-end coffee machines of WMF type 9000 S+ as well as to two syrup stations and a specially developed milk system, if required. It then moves the finished coffee to one of the dispensing stations where it can be removed for immediate enjoyment. The robot can prepare and serve up to 120 coffee per hour.

A cool highlight: the hot drinks can be decorated with an individual text or picture on the milk foam using a food printer, at no extra cost. Even your own photos can be uploaded via app and displayed on a fresh cappuccino. “Our customers can be as creative as they like: They can upload a vacation selfie directly from Milan and order the printed coffee in Karlsruhe for their return,” says Michael Stille.

Sustainability and fair trade have been important components of MyAppCafé right from the start: the cup and lid are made of environmentally friendly and compostable corn starch and all ingredients have organic and fair trade seals - from coffee to optionally available soy milk.

The robot barista never gets tired: MyAppCafé is active 24 hours a day, seven days a week - without waiting or queuing. Practical in times of Corona: Payment is made with all common contactless methods, including EC and credit cards, PayPal, ApplePay and GooglePay.

The Corona pandemic has naturally slowed down the momentum, as in all industries, but new inquiries are still coming in every day worldwide. Among other things, talks are currently underway with several listed companies in Germany who plan to integrate MyAppCafè. On average, it takes two months from ordering a MyAppCafé cell to the start of operations at the desired location.

Even though Corona has slowed down the search for a location, the prospects are very positive: By 2021 at least 50 boxes should be in place in Germany. Demand is also strong internationally - the first cells in action as well as appearances at franchise fairs have generated interest from Dubai, the USA, Poland, Sweden, France and Israel, among others. As locations are so far among other things shopping centers, universities, stations or airports in the focus, but the possibilities for the integration of the robot-supported MyAppCafé cell are versatile.