Mar 16, 2022 — Every working day, a 350-ton nacelle for an 8MW offshore wind turbine leaves the Siemens Gamesa factory in Cuxhaven. In the ultra-modern flow production environment, four heavy-duty AGVs supplied by Stäubli WFT assist in transportation from station to station within the factory. 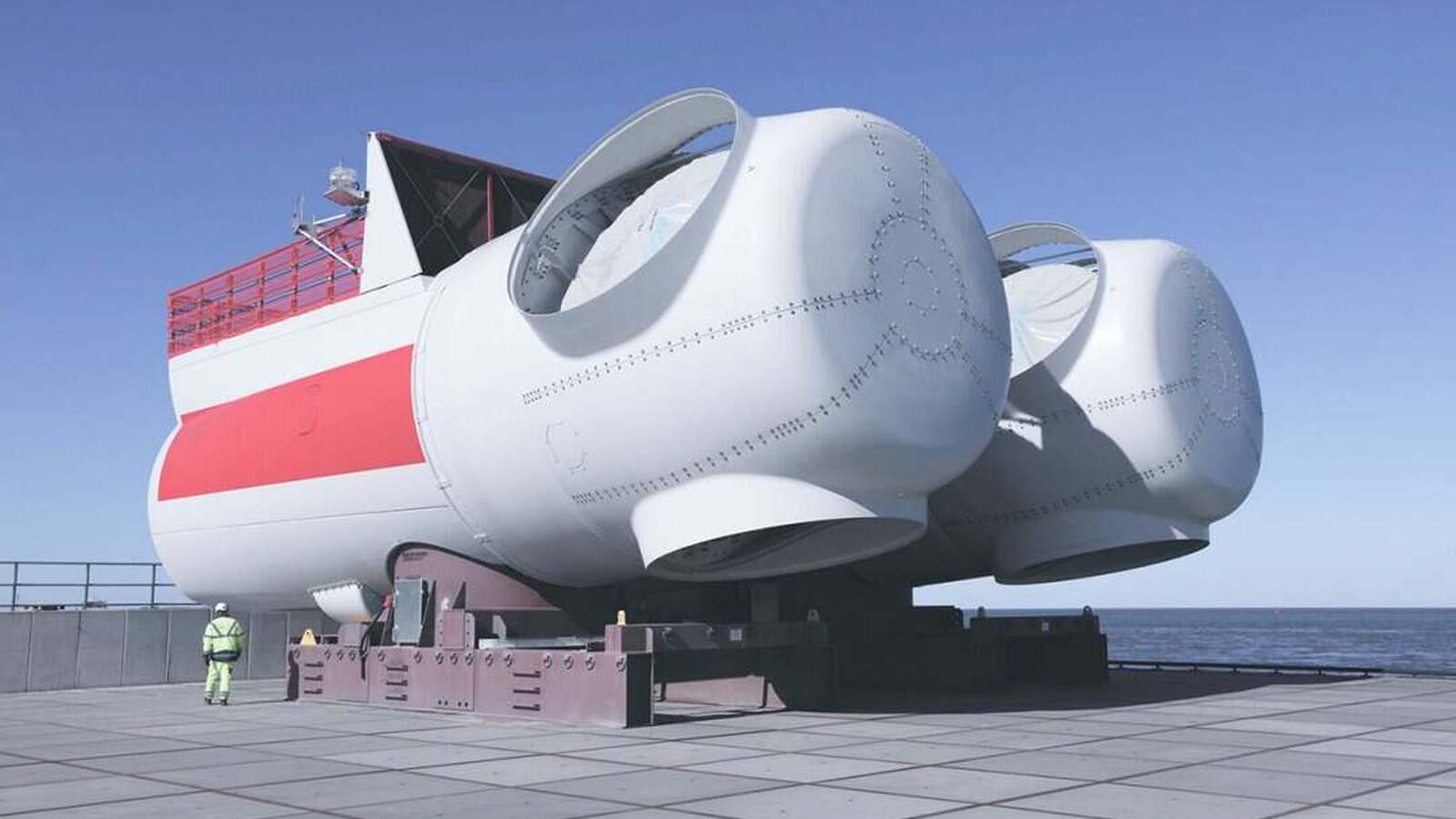 The manufacture of wind turbines for offshore installations is on a completely different scale from standard mass production. The rotor blades of the 8MW SG 8.0-167 DD turbines that Siemens Gamesa builds for offshore wind farms are 81.4 meters in length. The turbine’s total height is 167 meters (10 meters higher than Cologne Cathedral) and the nacelles weigh around 350 tons. These machines for sustainable energy production are in demand all over the world. The nacelles are built at the Cuxhaven plant, which was newly constructed in 2018 for this very task. The rotor blades come from other sister plants of the Siemens Gamesa Group.

Just as impressive as the dimensions of the turbines are the workflow and capacity of the plant in Cuxhaven. More than 250 nacelles are produced each year and loaded directly onto specially built transporter ships. In other words, the 600-strong workforce builds a complete wind turbine nacelle every day. This is flow production on a mega scale.

The three main components – the hub, the two-story “backend” machine house, and the generator itself – are assembled on three parallel production lines. The magnets that go into the generator are also manufactured at the Cuxhaven plant, with a similarly high degree of vertical integration. These three massive components are brought together to form the complete nacelle, which is then comprehensively tested at an inspection station.

Assembly takes place in cycles at individual stations, and the components, which weigh many tons, are placed on frames that allow them to be transported from station to station. This is mainly done by crane, but in order to ensure maximum flexibility, driverless heavy-duty transport systems (AGVs) from Stäubli WFT are also used for transport around the factory. The AGVs maneuver themselves into position underneath the frames, lift them up, and move them to the next assembly station.

Three heavy-duty platform AGVs from the Stäubli WFT range with a load capacity of 200 tons are in service. They get around with the help of eight omnidirectional drive units – a patented in-house development by Stäubli WFT. Eight fixed rollers provide support when transporting the load.

A human operator moves the 8.00 x 2.62-meter platform under the frame by remote control and raises the platform by 200 mm at the push of a button. At a maximum speed of 1.2 km/h (2.1 km/h when unloaded), the operator transfers the component to the next assembly station. This ensures smooth travel and is gentle on tires as well as floors – thanks to the patented Stäubli WFT drive technology, rotary movements cause minimal abrasion.

RFID tags installed in the floor create the right conditions for semi-automatic operation. The AGVs then move between pre-programmed positions. And this is only the first stage in the integration of heavy-duty AGVs into automated material flow concepts. The control system also allows integration into Industry 4.0 environments and warehouse management systems. In addition, Stäubli WFT can provide AGV data for process optimization.

The combination of transport by crane and/or AGV has been adding value since the start of production in Cuxhaven. Ample proof of its unique advantages was provided during the first model changeover. “Production started with our 7MW offshore turbines,” says Nils Schattenmann, who is in charge of rolling equipment at the plant. “Later, and without any interruption to production, we switched to the current, much larger 8MW turbines. The time and effort involved was minimal, with the AGVs only having to be reprogrammed.”

Senior management is also completely satisfied with the vehicles supplied by Stäubli WFT in more conventional operations. “The AGVs work reliably and with high precision. Because these vehicles are an integral part of the internal material flow, we cannot afford any downtime here,” Schattenmann adds.

Transport to the test stand with 450-ton AGVs

The reliability factor applies all the more to the fourth heavy-duty AGV supplied by Stäubli WFT. Its load-bearing capacity of 450 tons is more than twice that of its predecessor, and with a platform dimension of 10.5 x 3.02 meters, it is also significantly larger. Here, 16 drive units, supported by 19 fixed castors, ensure mobility.

This AGV is essentially reserved for the final process step – the transport of the finished nacelles to the test stand. It therefore also has a fixed role in the mega-scale flow production.

The vehicle can lift and transport more than eleven times its own tare weight of around 40 tons, bringing a total weight of more than 400 tons to the weigh station. There are very few AGV manufacturers in the world that can compete in this payload class, but Stäubli WFT goes one better: For loads of 500 tons and over, multiple vehicles can be hitched together. AGV control systems are basically set up for this.

Siemens Gamesa plans to purchase a fifth heavy-duty AGV from Stäubli WFT for the Cuxhaven plant in the near future. “We are currently setting up production for the next generation of offshore wind turbines, which will be significantly larger and also deliver an enhanced 11 MW of power,” says Schattenmann. In concrete terms, this means that the SG 11.0-200 DD will have a rotor diameter of an incredible 200 meters, and the nacelles will weigh a third more. They will also be equipped with a helicopter landing pad.

Flexibility again played a central role in planning the in-plant heavy-load material flow. For this reason, the system designers at Siemens Gamesa opted for a second model of the existing 450-ton platform rather than a single, even larger AGV. As Schattenmann explains, “We will then transport the finished nacelles of the new turbines from final assembly to the test stand on the two 450-ton vehicles operating in tandem. The fact that Stäubli WFT has the technical expertise to enable synchronous operation of vehicles of this size is a great advantage for us. It allows us to use the vehicles individually or paired up for maximum flexibility.”