Multi-Tasking Industrial Robots: A Future Within Reach for Today’s Manufacturers

For decades, robots were designed and programmed to perform one task and one task only. If a business ever needed a robot to perform a different task from the one it was programmed to do, it meant taking the robot offline, physically interfacing with the robot, uploading new programming, and booting it back up. This repurposing costs time, labor, and money. It also requires technical skills which are not readily available on the factory floor, meaning businesses may have to hire more specialized employees or pay for trainings. Multiply all this by number of robots on the factory floor, and the potential costs for robots in manufacturing becomes staggering.

But it doesn’t have to be. We live in an age known as the Fourth Industrial Revolution, or Industry 4.0, characterized by smart, adaptable technology. Automation is becoming increasingly, well, automated. In some of the more modern plants, machines are communicating with each other, even sending data to remote locations. Although machine-to-machine communication is not yet mainstream in manufacturing, it’s on its way. All that costly, time-consuming maintenance is being wiped away, saving labor, resources, and money.

Modern industrial robots are more connected, intelligent, and versatile than their predecessors. They can reduce production cycles and optimize asset utilization. Today, manufacturers can start the day with a floor of robots performing one task, then finish the workday with those same robots performing a different set of tasks. This adaptability makes multi-tasking robots very useful in the domain of high-mix, low-volume manufacturing.

A company might hesitate to make their robots programmable, thinking the endeavor involves huge costs and brand-new hardware, but no new hardware is necessary. A factory can outfit its existing robots with a system of low-cost software components to implement multi-tasking. Once installed, robots can be reprogrammed remotely to execute new movements according to the manufacturer's specifications.

You see, robots have controllers that run their programs. These controllers — hardware boxes with embedded computers that run the programs necessary for a specific task — often contain multiple programs which programmers can upload from virtually anywhere. Each program is an aggregation of a series of commands that the programmer packages before uploading. These programs are created using internal or external code editors or even using recordings of the robot's actions. There are 3D simulators which can simulate the robot’s work cell with a high degree of accuracy. Robot programs created using these simulators are called offline programs, and these programs can be directly copied to the physical robots and executed.

The number of tasks robots can execute has also grown. This has been a huge help throughout the coronavirus pandemic. Traditionally, the close proximity of assembly workers would put them at high risk of exposure to an airborne virus. With increased automation and robotics supplementing the human workforce, assembly lines can become less crowded and those risks can be substantially mitigated.

Other advantages include task updates, spotting problems before they start, and knowing precisely when maintenance is due. The same channels used to operate robots remotely can be used to send data from robots to manufacturers. In this way, remote access provides manufacturers with valuable information like job status, aggregated data about parts produced, maintenance, updates, and potential issues — all in real time.

Another advantage of robots' new versatility is greater return on investment. You might have the capital to purchase robots but don't because you are never manufacturing one thing for long, or you manufacture one thing exclusively but fear you might not have an indefinite market. With programmable robots, you can pivot to whatever is most profitable with minimal expense by simply reprogramming existing hardware. This means lower upfront costs, fewer robots, and more space on the factory floor. If you manufacture more than one product, your initial investment will be much lower with industrial multi-tasking robots because you can allocate more than one task to a robot, meaning fewer robots overall. Multi-tasking robots may also decrease the number of robot operations personnel needed to keep robots in production.

It used to be that businesses wondered if they could afford robots. But with robots now capable of performing more tasks more efficiently, the initial investment dropping, and a global pandemic demanding more space between employees, how can you afford not to?

Wipro offers industrial robotics with smart warehousing and smart manufacturing that can be deployed almost anywhere globally, not just in major regions. 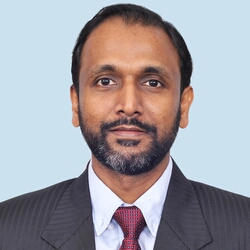 Prajod Vettiyattil is a Principal Architect at Wipro, working with Cloud, IoT and Robotics Technologies. He has implemented multiple projects integrating Computer Vision and AI with Industrial Robots from FANUC, Yaskawa and Kuka.