In the newly published ‘World Robotics 2018 Service Robots’ the IFR forecasts a continued boom in sales of mobile robots in logistics. Unit sales of automated /autonomous guided vehicles (AGVs) will increase by 66% in 2018, and the IFR forecasts new sales of US $17.5 billion in the period 2019 and 2021.

The boom in logistics robots is driven in part by technical advances and in part by business model changes in the industries adopting these robots.

Variety of use cases

Advances in sensors and vision technology mean that robots can now move freely around warehouses and factories, sensing and responding to the movements of people and objects around them, without the need for expensive external infrastructure for navigation. Traditional AGVs are programmed to follow pre-defined routes, guided by floor marking and /or sensors. If these AGVs encounter an obstacle, they must wait until their pre-defined path is cleared before moving on. Today, AGVs can plan and execute an optimal path in real-time, or can follow a pre-programmed path, but calculate and execute an alternative if the way ahead is blocked. This capability enables them to navigate areas in factories and warehouses in which workers move around freely. In hospitals and hotels, autonomous guided vehicles can be loaded and secured by a worker and then sent to a specific location to be unlocked by a staff member or hotel guest with the use of a code supplied when they place the order. AGVs offer substantial benefits for the healthcare sector where nurses, who are in short supply, spend as much as 20% of their workday transporting equipment and medications.

Another mobility trend, not captured currently in IFR statistics, is to fit existing equipment that has previously required a driver - such as a fork-lift truck – with software to enable it to operate autonomously.

Vision and gripping technologies increasingly enable robots to pick and load un-sorted items of different weight, shape and robustness. It’s worth noting, though, that these developments are still at an early stage and there are many picking situations in which human dexterity is required. This is particularly the case when objects are limp or can get stuck or jammed easily. The design of asuitable robot solution needs to take into account the spectrum of objects to be handled.

Rapid adoption of automated guided vehicles is also being driven by changes in the way business is organised. The boom in e-commerce is one of the principle business model changes driving the adoption of AGVs. Perhaps counter-intuitively, e-commerce has driven increases in both automation and job creation. This is because the work of selecting and transporting goods was usually done for free by customers themselves, whereas now logistics companies pay workers to do it. E-commerce has created more logistics jobs than have been lost in physical stores. Economist Michael Mandel reports that in the U.S., 355,000 e-commerce jobs were created between 2007 to 2016 - seven times more than were lost in the general retail sector during that period.

Changes in the way manufacturing is organised is also creating demand for mobile robots. The need to produce smaller batch sizes of an increasing number of product varieties is driving a shift away from production stations that move parts along between machines on a conveyor belt towards smaller production cells with mobile robots transporting parts between them. Fraunhofer IPA has developed a system in collaboration with BÄR Automation in Germany for an automotive manufacturer to transport car bodies freely around the factory floor. The system uses a navigation module developed by Fraunhofer IPA that can read and aggregate data from any type (odometry, radar, RFID, laser and others) and make of sensor. It can therefore be used in any customer set-up without further programming. Some manufacturers are adopting a ‘Just-in-Sequence’ model for supplies in order to reduce the cost of holding parts inventory. The required parts are ordered at the time needed and are transported directly from the loading bay to the production cell. This calls for autonomous guided vehicles that can communicate with scheduling systems and move freely around the factory, since production is planned on the fly. (See the IFR report ‘Robots and the Workplace of the Future’ for more information on how changing business models in logistics, manufacturing and healthcare will drive robot adoption).

A significant advantage of logistics robots is that they can be effectively integrated into digital automation networks, giving manufacturers, logistics and other companies a real-time overview of operations. A robot that is transporting medicines in a hospital, for example, can check inventory for the medicine it has collected. If the number falls below a given value, the hospital’s purchasing software automatically orders a new batch. Data transmitted by the robot enables users to visualise – for example through augmented reality glasses - the AGV’s map and internal systems, meaning a technician can identify a problem and, if necessary, quickly copy a route from one robot to another, minimising time and money lost to machine downtime if one AGV misfunctions.

Robots are increasingly moving out of their cages to provide support to workers in factories, warehouses, hospitals and other workplaces, lifting, fetching, carrying and performing tedious, unergonomic tasks. Mobility is central to the concept of human-robot collaboration, and will be key to future robot adoption, particularly by small-to-medium sized companies that have only just begun to automate.

A note on terminology

Autonomous is generally used to imply the use of software that enables real-time intelligent path planning to reach a destination (i.e the vehicle is programmed to be able to calculate and select from a range of options when faced with an unplanned event or obstacle).

An industrial mobile robot is a robot arm that moves in three or more axes, mounted on a mobile base and used in an industrial context (vs. in a public space, for example).

The IFR publishes statistics on Logistics Systems which are automated and autonomous guided vehicles for transporting goods and people in factories, warehouses and outdoor working environments. 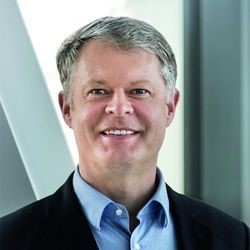 Head of Department Robot and Assistive Systems and