Nov 29, 2018 — Robots can apply adhesives far more accurately than human workers and are used for this task in a range of manufacturing environments. Machine manufacturer Dürr uses collaborative robots for adhesion, enabling robot and worker to operate at the same time in the same space – the robot does not have to be shut down each time the worker needs to perform a task. 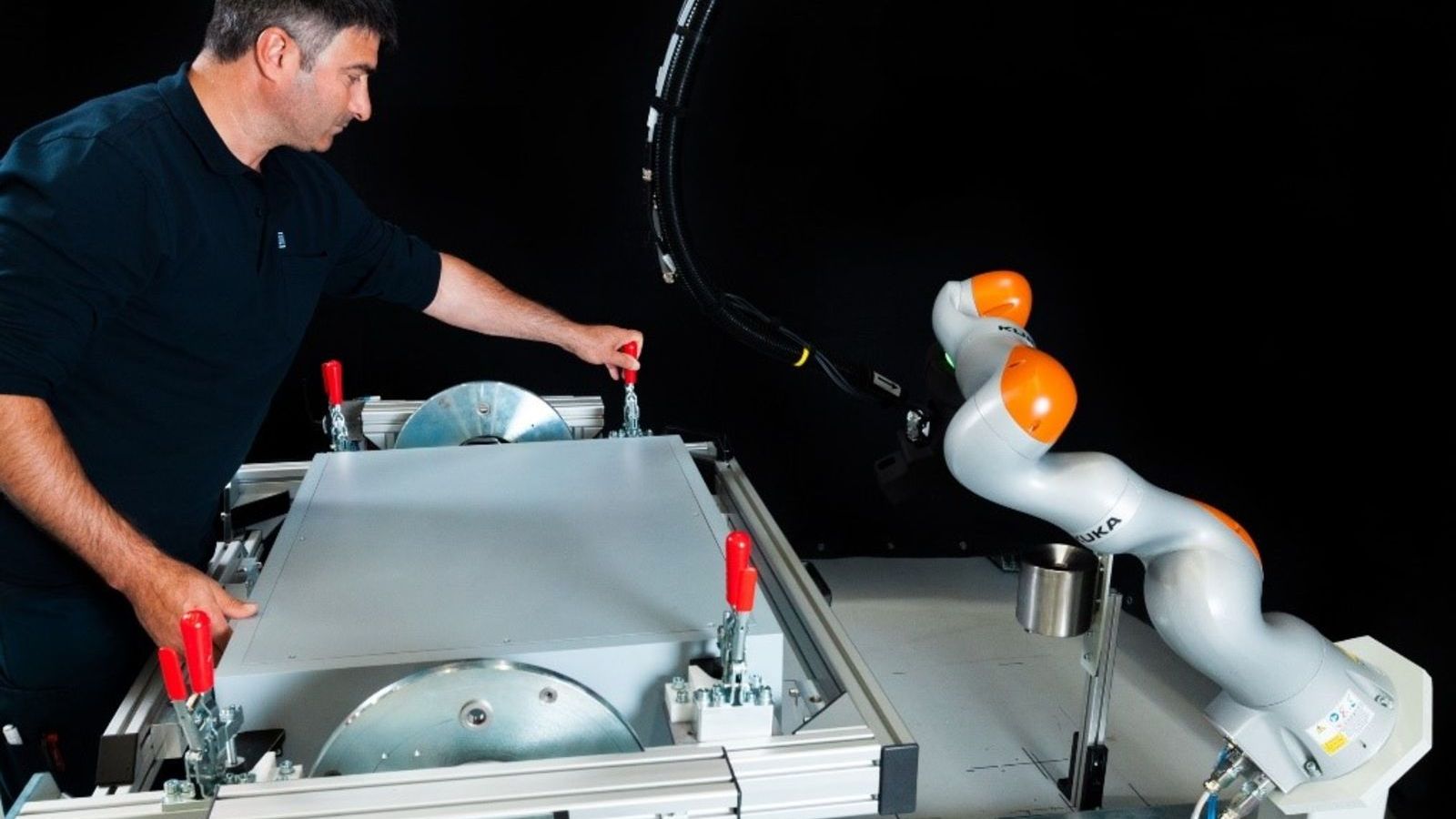 Duerr AG is a leading global machine and systems builder. As a supplier of turnkey systems for automated adhesive bonding processes, Duerr develops robots cells with human-robot-collaboration (HRC) for the automotive industry. About 60 percent of sales are generated through business with automotive manufacturers and suppliers.

The human operator and robot work together in final assembly without the need for physical safeguards: Sensitive LBR iiwa lightweight robots from KUKA are used for adhesive bonding of GPS antenna covers and tanks in the vehicle body.

Here is how the system concept for automated tank gluing with the LBR iiwa works: In final assembly, the skilled worker moves the tank to a turntable with the aid of a manipulator, cleans it, moves it into the correct position and transfers it directly to the robot for further processing. To prevent the adhesive nozzle from drying out, the application nozzle is located in a seal reservoir. Following a signal, the robot moves out of the reservoir into the home position. Here, the adhesive flows into a collection container and adhesive nozzle is cleaned manually. When the starting point is reached on the stationary tank, the nozzle opens under pressure so that no air bubbles are created. The robot then applies the adhesive bead onto the tank very evenly and ensures that the bead allows for an accurate fit using sensors on the application head.

“It is definitely possible to apply an adhesive bead by hand, but the result cannot match the precision of a robot,” explains Ahlborn.

A robot-based solution can – as opposed to a linear gantry – map the three-dimensional complexity of the bead geometry. Thanks to its seventh rotating axis, an HRC-capable robot like the LBR iiwa glues in a radius of 360 degrees – without re-orienting or having to set parts down. Once the robot has completed its task, the skilled worker takes over again by fitting the tank into the vehicle body at the specified position. This complex operation requires the individual skills of the human operator. The manipulator supports the operator during ergonomically unfavorable motion sequences.

Despite the absence of fencing and enclosures for the adhesive bonding processes, the safety requirements are high. The entire safety concept must meet stringent specifications and norms based on a risk assessment. Among other things, the robot is also positioned so that direct contact with the human operator is minimized. The robot must also switch off within milliseconds when contact is registered. The design of the adhesive bonding cells is such that the robot operates below the human worker’s head and chest area as a general rule. The application technology, consisting of the lightweight applicator and the lightweight robot, has a soft, rounded design with a large surface area so that only low forces are generated upon contact with the robot. “We deliver system technology for the new reality of human-robot collaboration from a single source,” says Ahlborn.

HRC solutions: the market of the future

HRC systems is a dominant theme in the automotive industry. “In the field of adhesive bonding, we have already sold ten systems,” reveals Ahlborn. The first system with the tank application was put into operation by the first customer in March 2016. This is why Duerr looks optimistically toward the future. “Thanks to our HRC-capable solutions using the KUKA LBR iiwa, we hope to win further orders,” states Ahlborn. Beyond this, HRC solutions for the robot-based adhesive bonding of small washers and other components are being worked out in Bietigheim-Bissingen.