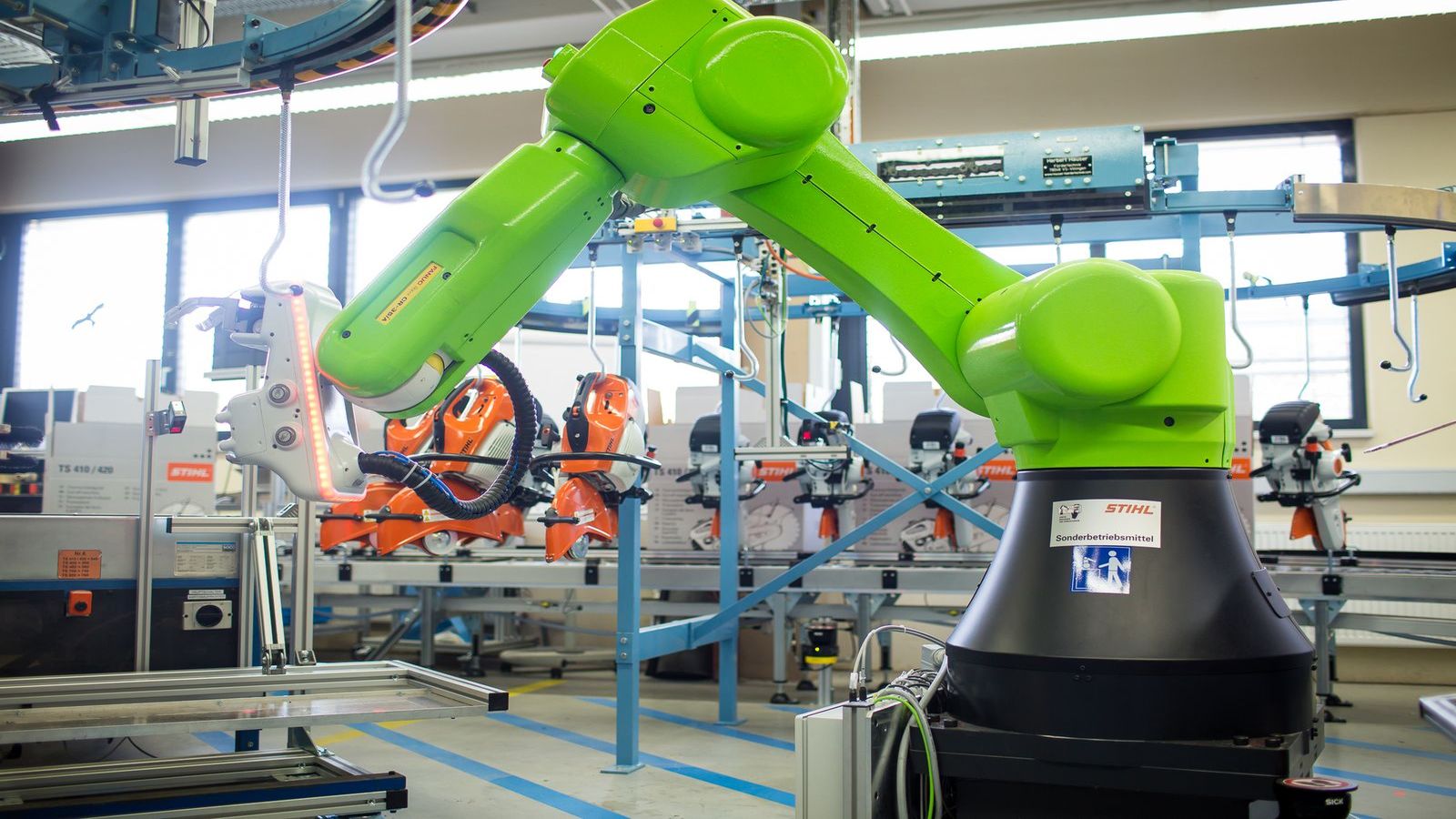 With the introduction of the FANUC CR-35iA, STIHL has taken a clear step forward in the development of production processes. Designed to work alongside humans, the FANUC CR-35iA is the world’s strongest collaborative robot and does all the lifting for staff on the disc cutter packaging line.

The well-known German chainsaw manufacturer STIHL also manufactures a range of cut-off machines. A cut-off machine weighs around 10 kg, and without the assistance of the FANUC CR-35iA, the human operator has to lift each one single-handedly. Up to now, this has proven to be a considerable burden for the operator. Designed to do all the lifting and positioning work while interacting safely with humans, this is where the FANUC CR-35iA collaborative robot comes in.

Why human-robot collaboration was selected as a solution

Collaborative robots were introduced to reduce the physical strain on human operators and make processes more efficient. On STIHL’s new cut-off machine inspection and packaging line, the task of the robot is to remove the disc cutter from a suspended conveyor, carry out the shake test, and keep it suspended until a final visual inspection is completed. Subsequently, the robot then places the cut-off machine in a shipping box. To get the best results, the packing line staff were involved in the project from the outset. Not only were they able to give an expert assessment of the test set-up, but they also influenced the design and ergonomics, leading to the optimal solution.

STIHL has taken a clear step forward in the development of technology using the FANUC CR-35iA. The start-up of production only took three days. This was due to the good preparation behind the deployment of STIHL’s first collaborative robot. Even on the first night shift, the robot ran without a single hitch. This is where the team of Group Leader, André Lange, who is responsible for service and hardware planning, benefited from the close familiarity with FANUC robot technology that they have developed over many applications.

The ability to use the FANUC CR-35iA with the normal FANUC control system, just like its yellow “colleagues”, proved to be one of the major advantages for STIHL since the control technology and user interface are all the same. The system components used, like the FANUC “Line Tracking” software, which is particularly useful for synchronisation with the suspended conveyor system, the integration of camera systems or the proven “Collision Guard” software option, are already well-known and appreciated by STIHL.

This has huge benefits for STIHL. Since the first introduction of robotics in the mid-nineties, STIHL has accumulated a great deal of robotics engineering know-how, particularly with the hundreds of FANUC robots operating in across STIHL plants worldwide.

André Lange emphasises that “we adopt and follow relatively uniform production concepts at all locations. Production equipment, which is utilised worldwide, such as FANUC robots, makes life easier for us at various levels, from engineering and programming, right through to service.”

The FANUC CR-35iA has been in daily operation for more than half a year, and it’s not just project managers André Lange and Markus Wahl that are satisfied with the robot. It has also been fully accepted by the workforce. Affectionately referred to internally as the Hulk, the collaborative robot is something that none of STIHL employees wants to do without.