Dec 05, 2018 — Specialist glass maker Saint Gobain uses a collaborative robot equipped with a force-torque sensor for glass polishing, reducing production time by one third and freeing workers from the constant vibration of manual polishing. Employees now program the robot by guiding the arm, prepare the glass and also wash the polished glass. 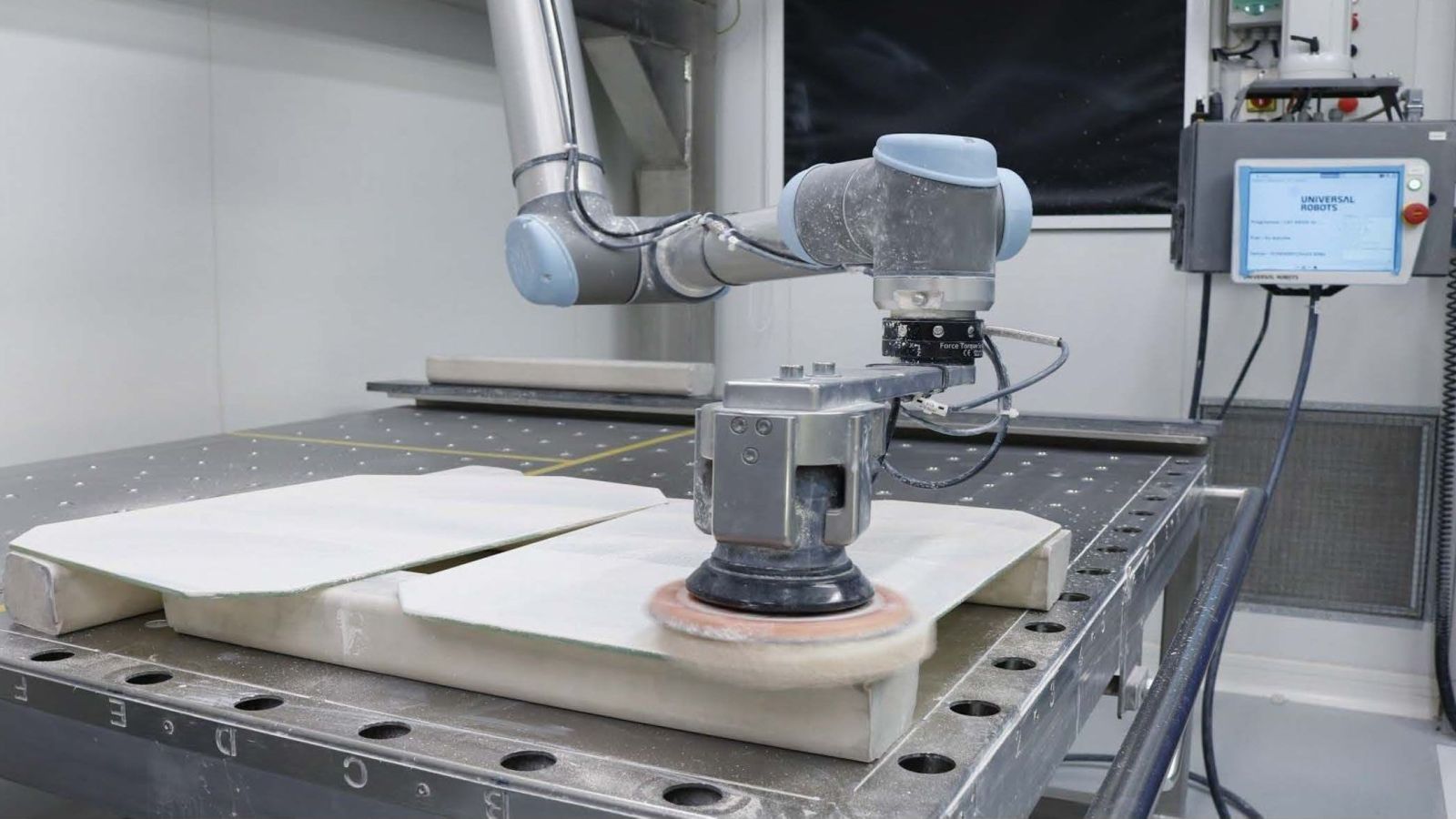 Saint-Gobain’s plant in Sully-sur-Loire, France, focuses on glass production for the armoured and aeronautical industries, and the civil market. In their shift towards industry 4.0, management has deployed collaborative robot cells to free employees from tedious, repetitive tasks. ​Robotiq’s FT 300 Force Torque Sensor​ ​​has​ ​proven​ ​essential​ ​to​ ​automate​ ​the​ ​grueling​ ​glass​ ​polishing​ ​process.

Saint-Gobain was founded in 1665 as a public society manufacturing luxury mirrors and glass under King Louis XIV’s reign. The corporation kept high quality standards through the centuries, expanding its business throughout the whole housing industry. Now a global company, it employs more than​ ​185,000​ ​people​ ​worldwide.

Near its original headquarters in the outskirts of Paris, Saint-Gobain still works on high-end glass production. Human labor provides high-value work to the finished product. But some tasks are more tedious than others. This is why the Sully-sur-Loire factory, like many other Saint-Gobain plants, began to deploy​ ​collaborative​ ​robot​ ​cells​ ​into​ ​their​ ​process​ ​about​ ​a​ ​year​ ​ago.

Freeing employees from those grueling tasks begins with finding a technology that would do the job on their behalf. Saint-Gobain’s Digital Manufacturing Manager, Ignacio Sanchez, had to find a solution for a difficult glass polishing process. The operation is painful, frequently causing musculoskeletal disorders for workers.

“The operator had to polish all of the glass surface, repeating the same movement on and on,” Sanchez explains. “He then does the surface preparation of the glass before it becomes one of many layers of an armoured glass. This second step is a lot easier. We wanted an automated solution for the polishing part of​ ​the​ ​process.”

Saint-Gobain turned to local automation solutions provider, HMI-MBS engineering and services, for expert advice. Their representative Nicolas Bouhet quickly presented a first option. “Saint-Gobain’s application had a very important diversity of reference points. There was also a problem of production space, since the cell had to be deployed in a small area in order to work in collaboration with the operators. We naturally chose to work with niversal Robots on this project considering safety requirements, the ease of use that was required, all this​ ​in​ ​a​ ​small​ ​space.​ ​We​ ​chose​ ​the​ ​UR10​ ​model​ ​to​ ​be​ ​able​ ​to​ ​reach​ ​every​ ​area​ ​of​ ​every​ ​type​ ​of​ ​glass.”

HMI-MBS performed many tests at their lab, which is about 15 minutes from Saint-Gobain’s plant. The first proofs of concept did not deliver viable options. “We ended up in a dead-end,” recalls Bouhet. “Then we had the idea to use the ​FT 300 module with the path recording function. We managed to integrate it into the robot and continued with tests at our offices. We then moved to Saint-Gobain and worked with the operator​ ​to​ ​see​ ​if​ ​the​ ​product​ ​met​ ​Saint-Gobain’s​ ​expectations.”

We’re able to produce the same amount of work in two 8-hour shifts instead of three,​ ​before​ ​the​ ​robot​ ​arrived.” For Christophe Legeay, Methods Technician at Saint-Gobain Sully-sur-Loire, automating the polishing process of each layer of armoured glass gave relief to operators who were previously assigned to this task. “It allowed them to no longer experience vibrations in their shoulders or perform repetitive movements.​ ​The​ ​installation​ ​of​ ​the​ ​robot​ ​was​ ​more​ ​than​ ​welcome,”​ ​he​ ​explains.

From now on, all the operator has to do in the polishing process is program the proper path for the product and set the glass for polishing. “The robot asks us to place reference marks to check the positioning. You cannot run your application until you have validated your positions. As soon as the validation is done, you press​ ​start​ ​and​ ​the​ ​robot​ ​starts​ ​running.”

While polishing is in progress, the operator simultaneously washes the glass that was previously polished. Then it’s time for surface preparation, a process in which human labor brings much more value into the product. “We assigned the robot to the hardest part of the polishing process,” recalls Sanchez. “During this time, the operator can focus on surface preparation. We’re able to produce the same amount of work in​ ​two​ ​8-hour​ ​shifts​ ​instead​ ​of​ ​three,​ ​before​ ​the​ ​robot​ ​arrived.​ ​We’ve​ ​achieved​ ​ROI​ ​in​ ​less​ ​than​ ​a​ ​year.”