May 29, 2019 — At Bischofszell Nahrungsmittel AG, a subsidiary of the Migros Group (Switzerland), the potential of new technologies is currently being explored. In a pioneering MRC pilot project over a fixed period, the management set out to achieve two objectives, namely the efficient production of food and the humanization of the workplace. 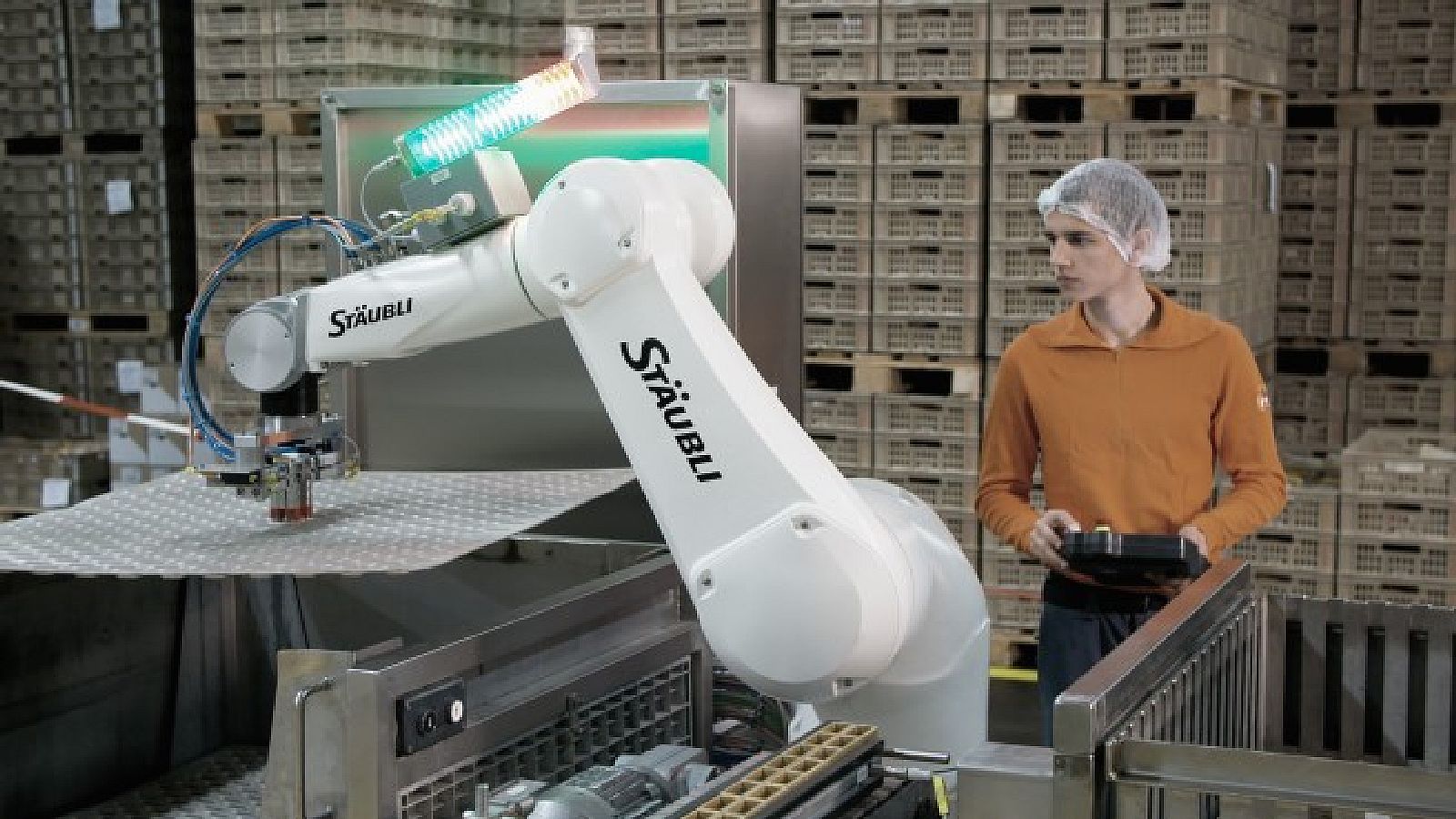 Bischofszell Nahrungsmittel AG, a company based in the town of the same name near St. Gallen, specializes in the production of convenience foods. The factory works around the clock making delicious ready-made meals that would not be out of place in a haute cuisine setting. Customer demand for these products, with their quality and convenience of preparation, continues to grow.

Steffen Knoll, Technology Project Manager at Bischofszell Nahrungsmittel AG and dedicated automation expert, is a major advocate of the MRC (Man-Robot Collaboration) concept, and not merely for reasons of increased capacity: “MRC offers a completely new range of possibilities. It obviously gives us the opportunity to expand our capacity relatively easily, but it also enables us to provide targeted support by means of robotics to the strengths of our employees in terms of flexibility and intelligence, thereby minimizing health hazards and the risk of injury to humans arising from stressful activities.”

What Knoll is referring to becomes apparent when the application is observed in operation. It involves taking fully packaged convenience dishes that have come direct from the production line and stacking them in multiple layers on metal trays, which are then slotted into trolleys for transportation to the pasteurization/sterilization unit. The stages of this process, when performed manually throughout, entail injury hazards and health risks for employees.

While the distribution of the ready meals on the aluminum trays and the placing of spacers between the individual layers are among the more agreeable jobs on the packing line, stacking the large metal trays on the trolleys is by no means a popular activity. Manhandling the trays, which measure 900 by 900 millimeters and weigh in at a hefty five kilos, over a full eight-hour shift is heavy work. The trays have to be slotted accurately into the trolley, which brings with it the risk of crushed fingers.

“Our employees are very experienced in this work, but risk of injury cannot be ruled out,” adds Knoll. “What could be more appropriate than a division of the entire handling process between man and machine? Also, in direct collaboration at a single compact work station without being separated by a safety barrier, the more agreeable tasks can be assigned to the human employee and the strenuous operations involving risk of injury to the robot. It seemed to us that MRC presented an effective solution.”

However, implementing the proposed scenario turned out to be more difficult than expected. After thorough analysis, the system integrators initially consulted expressed doubts about the viability of the application. Risk assessment, interface definitions, zonal sensory protection, selection of a suitable robot – there were a number of concerns that persuaded the cautious plant engineers to withdraw from the pioneering project.

Yet Steffen Knoll and his team were still convinced of its merits, so there was only one thing to do: they would simply have to implement the MRC concept by their own endeavors. The prerequisites for this were met, as the company already uses various robots in other applications and has proven expertise in the field. The MRC application would, however, be uncharted territory.

In the search for a suitable robot provider, Knoll recalled a visit to a trade fair in 2016 at which Stäubli was one of the exhibitors: “At a robotics conference, I saw the new TX2 series. Stäubli were advertising these six-axis machines as the world’s fastest in the safe robot category and, with their modular PLe/SIL3 safety features, as ideally qualified for MRC applications. Fast, easy-to-program robots for direct man-machine interaction with a suitably high payload – we realized that this could be the answer in our particular circumstances.”

The Perfect Robot for Man-Machine Interaction

Contact was immediately established with the Swiss offices of Stäubli at Horgen, and from that point onwards, matters proceeded apace. In consultation with Stäubli, the right robot for this particular instance of man-machine interaction was identified: a TX2-90L with CS9 controller. In contrast to classic cobots (co-robots), this collaborative six-axis machine has the necessary payload for the application in question. What was missing was a suitable universal gripper to handle both the aluminum trays and the spacers. In order not to lose any more time, the Swiss company designed and built the gripper as well as the complete system from its own resources.

The application comprises four main components – robot, tray magazine, spacer feed belt, and stacking trolley. The workflow of the cell is as follows. While a single human employee distributes ready meals on an aluminum tray and then places the spacers for the next layer, the Stäubli six-axis machine operating in SLS (Safe Limited Speed) mode picks up four spacers from the feed belt and places them on the top aluminum tray in the magazine. It then lifts the metal tray plus spacers out of the magazine, swings it in the direction of the stacking trolley and waits at a defined position until its human co-worker finishes distributing the current layer of ready meals, presses a button to confirm that the process is complete and withdraws from the work area. The robot, now operating at high speed, inserts the new tray in the stacking trolley ready for the next layer. A new cycle can begin. As soon as the employee re-enters the defined perimeter of the system, the robot automatically returns to Safe Limited Speed.

Visitors who come to see the pioneering MRC concept in Bischofszell can hardly believe that the entire system – including risk assessment, zonal sensory protection, programming, etc. – was developed in just four months without any input from external specialists. Intensive training quickly enabled the Migros team to draw up risk assessments from their own experience and to acquire the relevant expertise to program a complex MRC process. Visitors are also impressed that Raphael Merz, a fourth-year Migros trainee with a passion for automation, was able to program the complete MRC application within a few weeks of completing a four-day VAL3 programming course at Stäubli in Horgen and two days of safety training.

Steffen Knoll is justifiably proud of the achievement of his team in designing the system. What particularly pleases MRC enthusiast Knoll is the thoroughgoing compliance with the most stringent safety standards: “MRC is the future, but only if safety is guaranteed. In my view, the collaborative Stäubli robots are the safest machines on the market capable of handling such a high payload. We were able to cover the complete range of zonal protection specifications with the Stäubli TX2’s unique set of modular PLe/SIL3 safety features – Safe Limited Speed, Safe Stop, Safe Zone and Safe Tool – and with two Sick laser sensors. As a result, our employees were able to work side by side with the robot, and even without a safety barrier at one station.”

With this pilot MRC application, the development team at Bischofszell have shown that man-robot interaction has enormous potential for many of the production and assembly lines in the Migros group. “Some final detailed improvements will, of course, have to be incorporated into the system before it can be rolled out, to ensure durability of service in a production environment,” adds Knoll. “But the prime objective of demonstrating the benefits that flow from this pilot system has been fully achieved.” Migros could therefore soon become one of the first food manufacturers in the world to have MRC applications as standard technology in its production facilities.