About 21,000 service robots for professional use were sold worldwide in 2013, 4% more than in 2012, reports the IFR Statistical Department in the new study “World Robotics 2014 - Service Robots”. 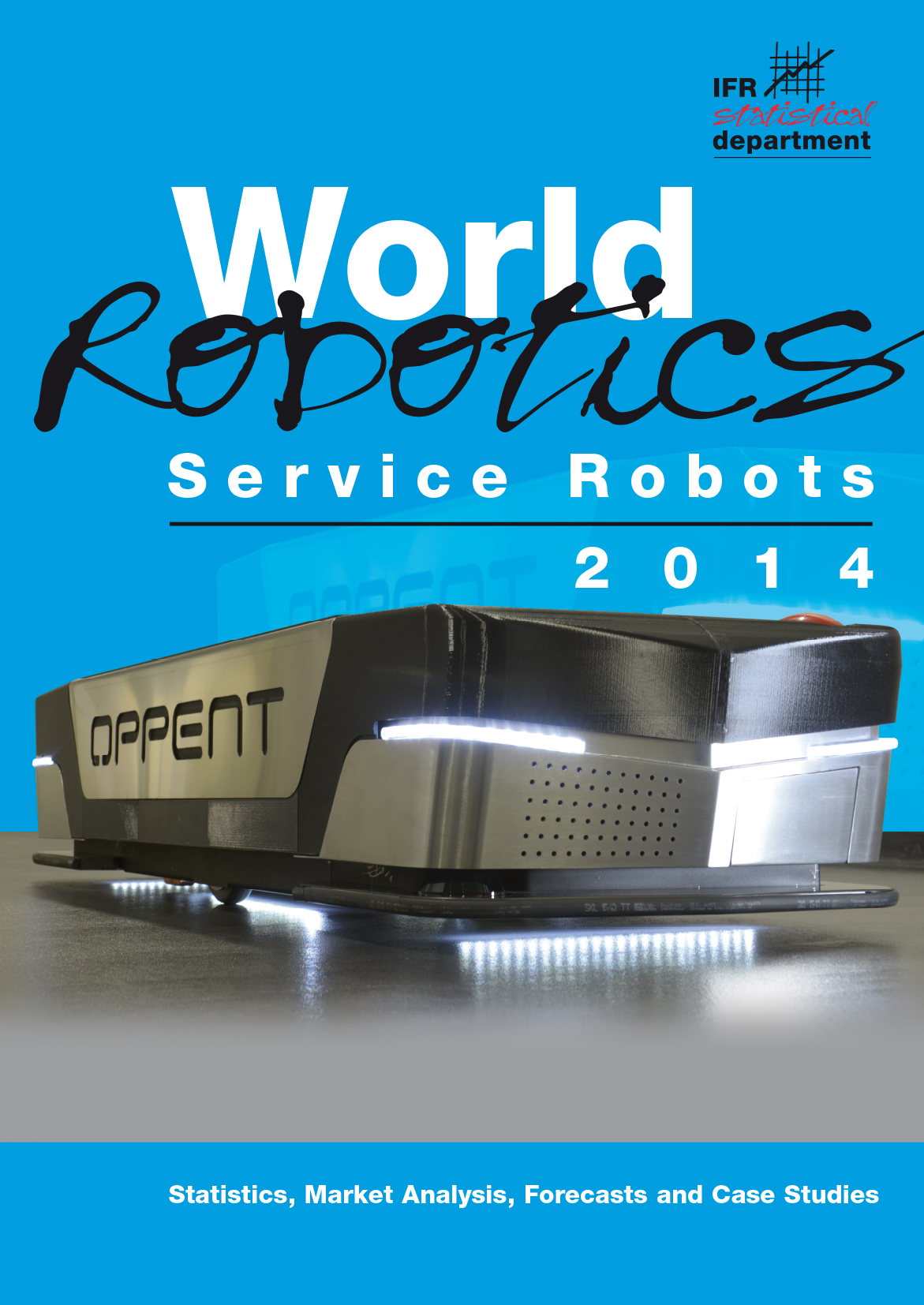 Frankfurt, 30 September 2014 - The total sales value slightly decreased to US$ 3.6 billion. For the period of 2014 to 2017, sales forecast which were provided by companies worldwide indicate an increase to about 134,500 units with an estimated value of US$ 18.9 billion.

“Robotics in personal and domestic applications has experienced strong global growth with relatively few mass-market products categories: floor cleaning robots, robo-mowers and robots for edutainment. Future product visions point to domestic robots of higher sophistication, capability and value, such as assistive robots for supporting the elderly, for helping out with household chores and for entertainment,” stated Martin Hägele of Fraunhofer IPA, the author of the study.

About 1,900 logistic systems were installed in 2013, 37% more than in 2012, accounting for 9% of the total sales of professional service robots. Thereof, about 1,300 automated guided vehicles in manufacturing environments are building up an increase of almost 70% compared to automated guided vehicles sales numbers in 2012. Despite the improvement of the data base, it is assumed that the actual number of newly deployed systems is far higher.

It is expected that the market of automated guided vehicles (AGV) in manufacturing environments increases significantly over the next years as important preconditions for the investment into AGVs will be increasingly met such as:

Automation of farming and livestock breeding is increasing

Almost 5,100 milking robots were sold in 2013 compared to 4,750 units in 2012, representing a 6% increase. Up to and including 2013 it is expected that about 40,000 milking robots are now in use. Certainly, milking robots can be considered a success in applying robotic solutions outside of the manufacturing scenario. In addition to the robots themselves, manufacturers offer customizable packages for milk storage and farm management. 760 units of other robots for livestock farming such as mobile barn cleaners or robotic fencers for automated grazing control were sold in 2013, resulting in an increase of 46%. Agricultural robots, e.g. automation of crop farming, are getting grounded in the market also. The total number of field robots sold in 2013 was about 5,900 units, accounting for a share of 28% of the total unit supply of professional service robots. The sales value of field robots increased by 4% to US$ 883 million, accounting for about 25% of the total value of professional service robot sales. It is estimated that almost 34,000 field robots will be sold in the period between 2014 and 2017, thereof, 28,200 milking robots.

Demand for defence robots and medical robots declined in 2013

With about 9,500 units, service robots in defence applications accounted for almost 45% of the total number of service robots for professional use sold in 2013. Thereof, unmanned aerial vehicles seem to be the most important application but their sales decreased by 12% to 8,500 units. A number of 750 unmanned ground based vehicles which include e.g. bomb fighting robots were sold, 80% more than in 2012. About 54,000 robots for defence applications will be sold in the period 2014-2017.

It should be stressed that the service robotics statistics offer a conservative estimate as only sales numbers which are reported by companies or retrieved directly from companies are considered.