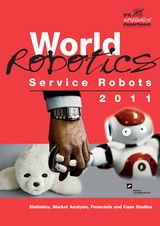 The number of service robots for professional use will increase to 87,500 units between 2011 and 2014

A strong growing sector will be the mobile platforms in general use. Service robot suppliers estimate that about 12,000 mobile platforms in general use will be sold in the period 2011-2014. These mobile platforms are purchased as stand-alone components for the design of highly customized service robot solutions. The variety of their sensors together with an able navigation system allows mobile platforms to freely move in different environments to perform various tasks such as data-acquisition. Adding additional manipulation capabilities such as a robot arm or simple lifting mechanism enables direct interaction with the environment as well as modifying it. If additionally the platforms possess network communication capabilities, a wide range of interaction concepts can be designed.

Sales of logistic systems and medical robots will also increase considerably in this period. The value of professional service robots between 2011 and 2014 is estimated at about US$ 14 billion in total.

“Future robot systems will be aimed at supporting citizens in key areas of activity: service robots in the professional domain will reduce physical workloads and will intervene in hazardous or life-critical environments; robot companions will improve personal well-being, security, comfort and entertainment.” stated Martin Hägele, Chairman of the IFR Service Robot Group.

Service robots for personal/domestic use will continue to increase

So far, service robots for personal and domestic use are mainly in the areas of domestic (household) robots, which include vacuum cleaning, lawn-mowing, entertainment and leisure robots, including toy robots, hobby systems, education and research. In 2010, about 2.2 million service robots for personal/domestic use were sold. Some 14.4 million units may be added in the period 2011-2014. Sales value in the forecasted period will be about US$ 5.4 billion.