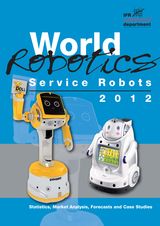 With about 6,600, service robots in defence applications accounted for 40% of the total number of service robots for professional use sold in 2011. Thereof, unmanned aerial vehicles seem to be the most important application as their sales increased by 11% to more than 5,000 units. The value of defence robots can only roughly be estimated. It was about US$ 748 million, 3% higher than in 2010.

The total number of field robots - mainly milking robots - sold in 2011 was about 5,000 units, accounting for a share of 31% of the total unit supply of professional service robots. The sales value of field robots increased by 18% to US$ 879 million. The continued considerable increase of sales demonstrates that milking robots are well established. Other robots used for livestock farming as well as agricultural robots are getting grounded in the market also. Automation of farming and livestock breeding is increasing.

About 2,100 logistic systems (courier and mailing factory logistic systems, which were mainly automated guided vehicles for factories) were installed in 2011, 3% less than in 2010, accounting for 13% of the total sales of professional service robots.

Turning to the projections for the period 2012-2015, sales forecast indicate an increase to about 93,800 units with a value of US$ 16.3 billion. Thereof, about 28,000 robots for defence applications will be sold in the period 2012-2015. They are followed by milking robots with about 25,800 units. This is probably a rather conservative estimate. These two service robot groups make up 57% of the total forecast of service robots.

About 2.5 million service robots for personal and domestic sold in 2011

In 2011, it was estimated that 1.7 million domestic robots, including all types, were sold. The value was about US$ 454 million. As for entertainment robots, about 841,000 units were counted in 2011, 12% more than in 2010. Numerous companies, especially Asian ones, offer low-priced “toy robots”. But among those mass products there are increasingly more sophisticated products for the home entertainment market. The total value of the 2011 sales of entertainment robots amounted to US$ 166 million.

It is estimated that about 15.6 million units of service robots for personal use will be sold between 2012 and 2015.

Handicap assistance robots have not taken off to the anticipated degree

“Rehabilitation robotics is a dynamic application area, as there is a need for technical aids for therapy or that contribute towards achieving some independence to carry out the activities of daily life. The field will continue to grow owing to the aging of populations in the industrialized countries” commented Martin Hägele, the author of the study. Handicap assistance robots have not taken off to the anticipated degree in the past few years. In 2011 however, this market seemed to start up. 156 robots were sold, up from 46 in 2010. This is still quite a low number but the prospects are promising. A lot of national research projects in many countries concentrate on this huge future market for service robots.