The robot companion still a vision?

So far, about 77,000 service robots for professional use were sold worldwide, reports the IFR Statistical Department in the new study “World Robotics 2010 - Service Robots”, which was published on Tuesday in Frankfurt. The total value of professional service robots sold was about US $13 billion. 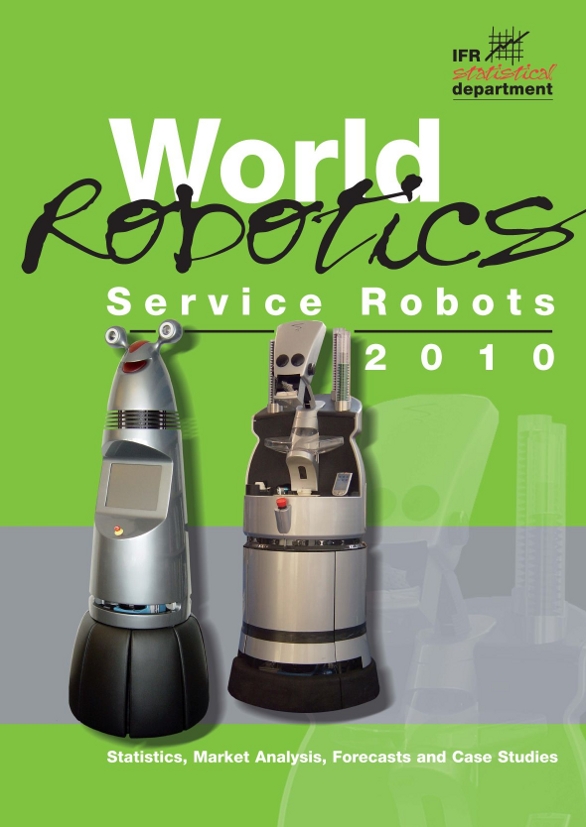 
Due to the economical downturn the annual supply decreased for the first time slightly in 2009 to almost 13.000 units. Service robots can be characterized as assistants of man. They take over jobs which are dangerous, impossible or unacceptable. They help to rationalize, to save time and to improve quality.

About 30% of the sold units of service robots are used for defense applications, mainly unmanned aerial or ground based vehicles and demining robots. Another 25% are milking robots, which were one of the first service robots ever produced. Both categories made up more than half of all sold service robots and can be regarded as the most established ones.

Cleaning robots and medical robots follow with shares of 8% each and underwater robots with 7%. Cleaning robots are mainly used to clean swimming pools. Medical robots are used in combination with minimal access surgery, but also increasingly for diagnostics. Diagnostic robots may come in the form of devices that guide diagnostic equipment to the human body. One of the most established robotic operations in this field is biopsy.

Underwater robots have gained significant attention through the Deepwater Horizon oil spill in 2010. They can inspect and work in sites where human beings cannot gain access.
A dozen robots descended into the Gulf of Mexico to transmit information from the disaster site and to support the entire underwater response operations.

Construction and demolition robots and mobile robot platforms for general use (6% each), logistic systems (5%) and rescue and security applications (4%) come in the next range.

Turning to the projections for the period 2010-2013, the stock of service robots for professional use is forecast to increase to some 80,000 units. Application areas with strong growth are robots for defense applications, milking robots, logistic systems, inspection robots, medical robots and mobile robot platforms for multiple use. The total value of professional service robots is forecasted at about US$ 12 billion.

Service robots for personal use will continue to increase

So far, service robots for personal and domestic use are mainly in the areas of domestic (household) robots, which include vacuum cleaning and lawn-mowing robots, and entertainment and leisure robots, including toy robots, hobby systems, education and training robots. Millions of these low-cost products are already sold and almost 11 million are forecasted to be sold between 2010 and 2013 representing an estimated value of US$ 5 billion.

The robot as a companion at home

Numerous developments are aimed at the application of robots e.g. as assistants or butlers for performing useful jobs in everyday environments. Such robots are required to carry out bring-and-collect operations (drinks, books, etc.), perform simple tasks in public or domestic environments (picking up objects off the floor, watering plants, operating and arranging furniture, heating up food etc.) or to provide access to information on demand. A certain focus is put on providing these services to elderly people as in most industrialized countries the number of people needing care will increase drastically in the next decades.

The physical layout of our everyday environment is organized with respect to human comfort and not the use of robots. Martin Hägele, Chairman of the IFR Service Robot Group concluded: “Even though these robot companions or assistants have the prospect of appealing to a mass market, it is felt that the required technological progress, attractive product designs and low-cost manufacturing pose significant challenges and may make this idea more of a long-term project that will not reach full maturity before the year 2020.”